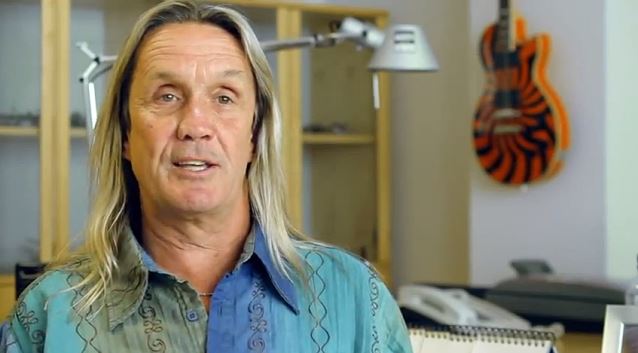 In a brand new interview with Overdrive, IRON MAIDEN drummer Nicko McBrain was asked if he thought the band was over when it was discovered that MAIDEN lead singer Bruce Dickinson had a cancerous tumor.

"Well, I'd be a liar if I didn't think for a minute that IRON MAIDEN [was] finished," he said. "[But] I thought more about the possibility of losing my friend than anything else, to be honest. Then later, I was thinking, 'God forbid if the worst ever happened, the legacy would be the last 16 albums.'"

McBrain, who is a dedicated Christian, continued: "I've got to be honest, I did question his mortality at one point and thankfully that didn't last long. Honestly, I got down on my knees and said a prayer, picked my thoughts up and got positive about it all, thinking to myself, 'If anyone can beat this, it's Bruce.' He's so positive about everything he's ever done in his life, or whatever he is about to do. Basically, I prayed for him and my prayers were answered, as well as everybody else that knows and cares for him."

According to McBrain, Dickinson's diagnosis didn't affect the recording of MAIDEN's new album, "The Book Of Souls".

"Do you know that none of us knew that he was poorly until after the record was done?" he said. "He performed that whole album knowing that something wasn't quite right with himself, but didn't get diagnosed 'till after we'd finished the tracks. So this album, 'The Book Of Souls', is just very special to me and all the rest of the guys.

"Bruce didn't know until December 2014 and then started his treatment in January 2015. We weren't aware, and neither was he, that he had the tumor."

"The Book Of Souls" debuted at No. 4 on The Billboard 200, having shifted 75,000 equivalent album units in the week ending September 10. That equals MAIDEN's highest rank ever, first achieved with 2010's "The Final Frontier".

IRON MAIDEN announced in May that touring plans to support the album wouldn't happen until 2016 to allow Dickinson time to fully recuperate after his successful cancer treatment.