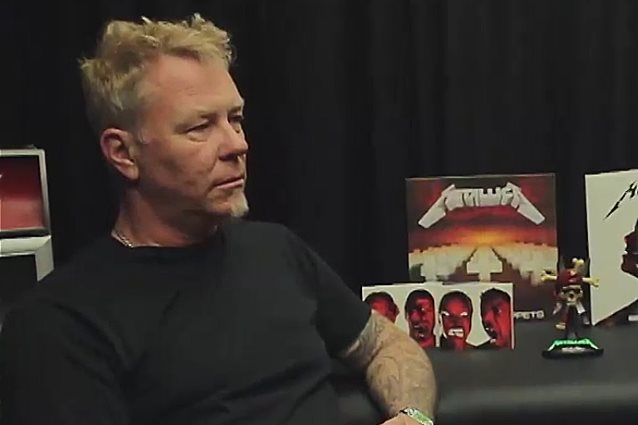 METALLICA frontman James Hetfield was interviewed by Radio Futuro before the band's April 1 concert at Lollapalooza Chile in Santiago. You can now watch the chat below.

Speaking about METALLICA's willingness to constantly take chances with its music and other projects, Hetfield said: "At the end of the day, we are artists and we love creating art that we like, and the songs and the artwork and the logos and t-shirts — everything. We are very blessed to be able to be in a position of doing whatever we want as an artist. But I think that honesty is very important for the integrity of the music, integrity of all of METALLICA. I think the fans really enjoy the fact that we write music that we want to hear. And it's simple — we keep it simple that way. And the fans will come, if you're honest about your art."

Hetfield also talked about the success of METALLICA's latest album, 2016's "Hardwired… To Self-Destruct". He said: "[I'm] very surprised — very surprised that, after 36 years, an album like this is important to people. It's a surprise still; it blows my mind that after this long, people are enjoying our music. It's as simple as that. We will continue to make music, play shows and do what we need to do as people. METALLICA helps us stay alive, and the fact that we're gonna be on tour for another two and a half years, it's exciting."

The North American leg of METALLICA's "WorldWired" 2017 tour kicks off in Baltimore and will hit stadiums in 25 cities before winding down in mid-August. Support on the quartet's first North American trek since 2009 will come mainly from AVENGED SEVENFOLD and VOLBEAT, with GOJIRA taking over for the latter group for the last six shows.

The first European leg of "WorldWired" kicks off on September 4 in Amsterdam, The Netherlands and stretches through November. After a break, the trek will pick up again on February 10, 2018 in Bologna, Italy, and continue through May, finishing up in Helsinki, Finland.