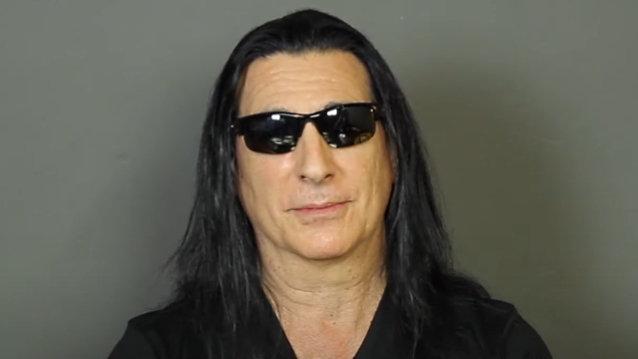 Last month, MANOWAR announced that it has recorded a song titled "The Revenge Of Odysseus" for the band's upcoming studio album. Bassist Joey DeMaio also traveled to Athens to record a narration with father-and-son team Kostas and Konstantinos Kazakos. Kostas, hailed in Greece for his participation in many movies and as an accomplished theater actor and writer, and his son Kostantinos, who is also a talented actor, narrated a touching dialogue between Odysseus and his son Telemachus. And to honor the historic source material, they did so in Ancient Greek, translated from English by Sakis Tolis of Greek metal band ROTTING CHRIST.

Asked in a new interview with Metal Hammer Greece's TV show "TV War" if the next MANOWAR release will be a full-length album or if it will be the previously planned follow-up to 2019's "The Final Battle I" EP, Joey said (as transcribed by BLABBERMOUTH.NET): "That's a very good question. You're the first person to ask that. And right now, I truly don't know what is coming next, because we had the inspiration to write this song, which I was thinking could be a very long normal song — like maybe 10 minutes — 'The Revenge Of Odysseus'. And it just got out of hand — it just kept growing and growing. It started out with, 'Maybe it'll just be in English.' Then it was, 'Maybe it'll be in Greek.' And then it became not just Greek — ancient Greek. And then something like famous narrators. And then it became, 'No, we're gonna take one of the most famous, if not the most famous actor in Greece.' And then his son is gonna play the part of Telemachus. And it just got bigger and bigger and bigger. And now, when they came into the studio here in Athens and recorded, it just turned out so amazing. And now I'm stuck with a big problem — there's so much incredible stuff that these guys performed… So the reality, just hearing words has given me the challenge, now how can I match this great performance with music that's gonna be worthy of these beautiful, beautiful performances? So, it's a big fucking problem. So I'm looking forward to getting back into the studio and trying to serve this in the best way that I can."

As metal fans will know, 2022 marks the 30th year since the release of "The Triumph Of Steel". With this album, MANOWAR surprised its fans with the over-28-minute-long track "Achilles, Agony And Ecstasy In Eight Parts", inspired by Homer's ancient Greek poem "The Iliad". In celebration of this memorable anniversary and as a "thank you" for the steadfast and passionate support of the Greek Manowarriors, MANOWAR has now taken on "The Odyssey", Homer's tale of the great hero Odysseus and his long and perilous quest to return to his wife and son.

"The Final Battle I" came out in March 2019. At the time of its release, it was announced that parts II and III of the trilogy would arrive at a later date, inspired by MANOWAR's adventures on the remainder of "The Final Battle".

In 2019, MANOWAR recruited Anders Johansson as the band's new drummer.

The Swedish musician made his live debut with MANOWAR in March 2019 in Brno, Czech Republic.

Former MANOWAR guitarist Karl Logan was arrested in August 2018 in Charlotte, North Carolina and charged with six counts of third-degree exploitation of a minor. He was jailed after pleading guilty to two child-pornography counts.

A few days after Karl's arrest was made public, MANOWAR issued a statement saying that he would no longer perform with the group. He has since been replaced by E.V. Martel, who previously played in a MANOWAR tribute band.