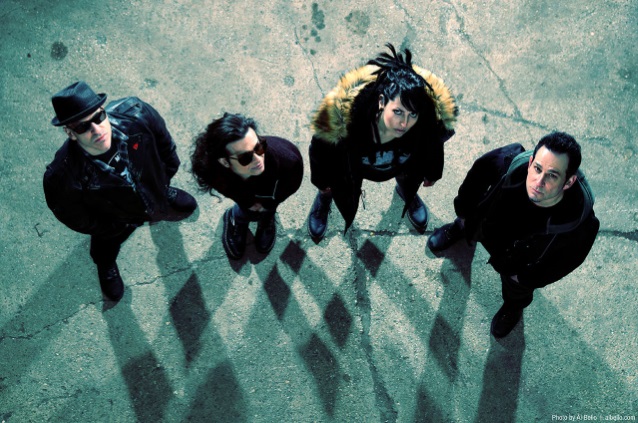 Chris of Montclair, New Jersey's 90.3 WMSC FM's "The Metal Teddy Bear Experience" radio show recently conducted an interview with guitarist Joseph Zampella (a.k.a. Joey Z) of Brooklyn hard rock veterans LIFE OF AGONY. You can listen to the entire chat via the SoundCloud widget below. A few excerpts follow (transcribed by BLABBERMOUTH.NET).

Joey: "What we've been doing is we've dove deep into our catalog of songs and records and again, purposely, we're giving the fans what they've been asking for. We've had such a large amount of fans requesting songs on social media, saying, 'I wish you would play that.' Or, 'I wish you would play this.' And we've been listening and looking at all these posts and actually building our setlists and re-learning our songs based on what people are saying. I think that's what bands need to do, they need to be more in-line and know what their fans want to hear. It's been great. Those shows [referring to the band's recent sold-out two-night stint at Brooklyn's Saint Vitus club, which kicked off the 'Rise Of The Underground Tour 2018'], were absolutely crazy, everybody had a chance to hear some of their favorite songs, even the ones we've never done live. It was killer. It was so much fun."

On whether LIFE OF AGONY will constantly be changing its setlist:

Joey: "Yeah. Actually, that's something we're going to pride ourselves on. We're pulling and adding songs constantly now. We have a new drummer, her name is Veronica Bellino. She's really down with learning whatever we need her to learn. She's totally open — I think she learned about 25 songs already, so, you can just imagine the setlists we're building around all this material we have. The beauty of it is we have so many tunes that we can mix and match on different nights and different shows and pull things out of the box and out of the hat and throw them in and it's really fun. It brings the fun factor back into it."

On what Bellino brings to LIFE OF AGONY:

Joey: "The cool thing is and I think what helps her with this is that she's always been a session drummer. She's been a friend of mine for a long time and we had a recent member change. Unfortunately, things happen and everyone moves on and we needed somebody. I thought of her and I mentioned her to the band and she was able to do it. Being a session drummer, they're constantly having to learn songs and learn parts on the spot, right there in the recording studio, so I think that kind of how would you say? 'Brain' and head on her shoulders gives her the ability to be doing what she's doing for us. Like, 'Oh, you want me to learn that by next week? Okay. Yeah, I'll have that song and the other one.' And she comes in and she slays it. She's like 'Wow!' She comes in and plays it flawlessly. It's a pretty cool asset to have going on right now."

On the band's "A Place Where There's No More Pain" studio album, which was released last year:

Joey: "The band worked hard on that record and I feel like we did give them [the fans] more of what they were looking for LIFE OF AGONY to put out. We already started sharing ideas for a new record, and, oh my god, I cannot wait to record this new record. We have such cool song seeds happening already and we hope to put out a new record by mid-2019. So, right now, we'll finish the 'Rise Of The Underground' tour, touring for 'A Place Where There's No More Pain' and then we'll go right into the studio right after the tour come early 2019 and start recording this new record."

On how far along LIFE OF AGONY is in the songwriting process for their next studio album:

Joey: "We have a good five, six song seeds already that, maybe more actually, but really solid stuff that we're sure we're going to be moving forward with these particular ideas. Yeah, things are looking really good for next year. We're just going to keep writing while we're on the road together. We're going to have a nice little recording setup with us and just drop ideas down when we want. That's the plan and come out with another record and not wait another 12 years for a LIFE OF AGONY record. We plan to keep pumping them out right now."

LIFE OF AGONY's "Rise Of The Underground Tour 2018" continues on May 16 at the Whisky A Go Go in Los Angeles. The tour will conclude this November in the Netherlands.

In January, LIFE OF AGONY announced the addition of Bellino to the group's ranks. She joined the band as the replacement for Sal Abruscato, who "amicably" left LIFE OF AGONY in December.

"A Place Where There's No More Pain" was released in 2017 via Napalm Records and marked LIFE OF AGONY's first studio album since 2005's "Broken Valley".