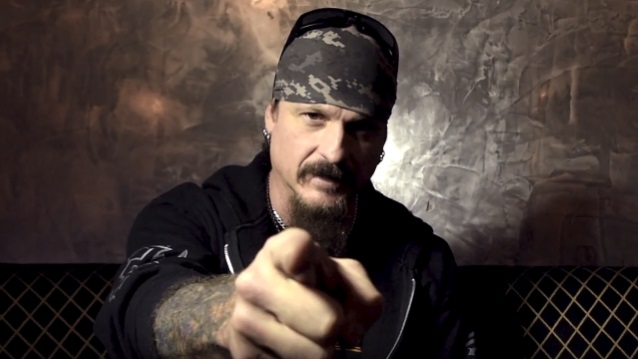 Allie Jorgen of L.A. Metal Media conducted an interview with ICED EARTH leader and guitarist Jon Schaffer prior to the band's March 8 concert at Belasco Theater in Los Angeles, California. You can watch the entire chat below. A few excerpts follow (transcribed by BLABBERMOUTH.NET).

On how he channels the various personal challenges he's faced over the years into his songwriting for the band's recent "Incorruptible" studio album:

Jon: "I think the important thing for this one was to be able to take some time away, even though I wasn't really off. I was out of the public eye for a while, but I was working on building our headquarters [Independence Hall] after my surgery. The band went through a lot and we really burned ourselves out from the schedule we had. The former management was really pretty brutal in the way things were handled. So, we had to basically go through a period, plus, like I said, I had my second cervical spine fusion. The first one was in 2000, then the second one was in 2014, so it took some time to heal up from that. Then, I decided, instead of immediately getting back into the studio, it was better to focus on building the headquarters building and getting all of that set up and the studio built so we can have a place going forward where we can do our own productions and everything."

On the role Independence Hall played in the creation of "Incorruptible":

Jon: "Absolutely, it did, yes. It was great to have it. Pre-production is a big deal in ICED EARTH. To be able to have a place where I can go and turn myself off from the rest of the world and start channeling all that energy, that, I think is what turns into the music. It was great. So, the production itself was really intense, but we always spend a good amount of time in pre-production. That allows us to be really prepared for when we start master tracking."

On what the "Incorruptible" album title means:

Jon: "A lot of people think it has something to do with politics, but it doesn't at all, actually. It just has to do with the dedication to ICED EARTH, which I've been completely dedicated to since its inception. It's just staying true to that vision and not wavering from the point and that's just always the way it's been, regardless of the changes in the personnel or whatever we've gone through, business situations that we've been in and some pressure from labels to kind of change the direction in order to sell more records or whatever. It's just not an option."

On why ICED EARTH fans are so fiercely loyal:

Jon: "It's because of what I said. They know they don't have to worry about ICED EARTH changing and taking an about-face and betraying. What we've done through all these years, it's not going to happen and they know that. I think it's a loyalty thing. I'm loyal to them, they're loyal to me, we are loyal to them and they're loyal to us. I think that's what it is. They're really passionate and it's awesome. It's a great thing."

On the "Incorruptible" track "Brothers", which was co-written with vocalist Stu Block, who joined ICED EARTH in 2011:

Jon: "We just wanted to write a song that sort of…I don't know, just about our brotherhood, about the bond we have made and how it just continually gets stronger through all of it, through the entire move forward. Stu's already done more shows than all of the singers that have been in ICED EARTH combined and we've spent a lot of time on the road together and in the air together. It's awesome. It's really cool. The chemistry is amazing. You know, there's been a lot of talent through the years in ICED EARTH. There's been periods where the chemistry's been really good, but this is an alignment of some really special stuff, I think. We're friends; we hang out together all the time, even when we don't have to be together having breakfast or lunch or dinner together, but we always end up together. And we stay up late on the bus and we're talking. We're not phone zombies and watching movies. We're hanging out together. It's a really cool, very, very special dynamic. I've been doing this a long time, so I know."

ICED EARTH is continuing to tour in support of "Incorruptible", which came out last June via Century Media. The cover artwork for the disc (as well as additional illustrations to every song) was created by David Newman-Stump from Skeleton Crew Tattoo (pencil illustrations) and Roy Young (colors).