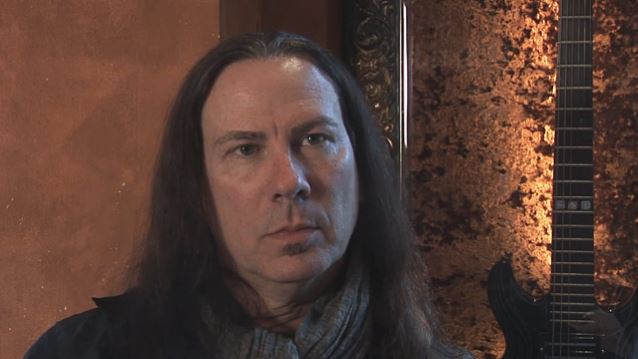 Greg Prato of Songfacts recently conducted an interview with KAMELOT guitarist and mastermind Thomas Youngblood. A couple of excerpts from the chat follow below.

Thomas: We started with the songwriting pretty similar to the previous record, "Silverhorn". We had our own ideas that we were working on at home, and then I flew to Germany in the summer of last year to work with our keyboard player [Oliver Palotai], to start putting these ideas down as songs. We probably had about seven or eight songs done through those sessions in the summer, and then we sent all the musical ideas to the singer [Tommy Karevik], to start working on vocals and melodies and lyrics. And then he could go work with our producer [Sascha Paeth] in Germany, and finalize all those parts. That's pretty much the way the songs were written. We recorded in different studios, including Tampa, Florida; Stockholm, Sweden; and Stutgart, Germany. A lot of different studios, a lot of long nights, but in the end, we're really happy with the product. We would send MP3s of demos to Karevik in Sweden, and also, our keyboard player and him worked together via a program that's kind of like Skype but it's for musicians, because you can record audio from the singer in Sweden to the keyboard player in Germany. So it's a new technology that I think will definitely help in the future, without having to fly all over the world to do the songwriting.

Songfacts: Do you prefer the whole band to be in one place to collaborate on songs, or at this point, it doesn't matter due to modern technology?

Thomas: For me, there's no substitute for sitting in the room together and bouncing ideas back and forth. I will probably always want to do that. And to some extent, we probably will always do that. Of course, people's time gets smaller and smaller, since we're touring a lot and everybody's got families. Your personal time gets a little bit more crushed. But the initial songwriting for me always has to be getting together in the same room, bouncing ideas back and forth. That's the way we've always done it, from day one. The little things, like maybe an idea I come up with after I get home, I'll send it over — that's easy to just discuss over the phone. But the initial creation, I think it's really important to be together.

Songfacts: Over the years, it seems like reviewers have described KAMELOT's music as either "prog metal" or "symphonic metal." Which description do you prefer?

Thomas: For me, I don't really look at it as one of the other. I think it's a total mixture of progressive, symphonic, rock, power metal... there's so many different things that we blend into what we do, that I would hope that we never really fit into any of those categories completely. I would say we're probably closer to symphonic metal, but those kind of tags — I know they're important, but it's important that we're free to do what we want. And I think that's pretty cool with our fans, that they expect weird things here and there throughout our albums. I think that's one of the cool things about being in this band — having that freedom.

Read the entire interview at Songfacts.