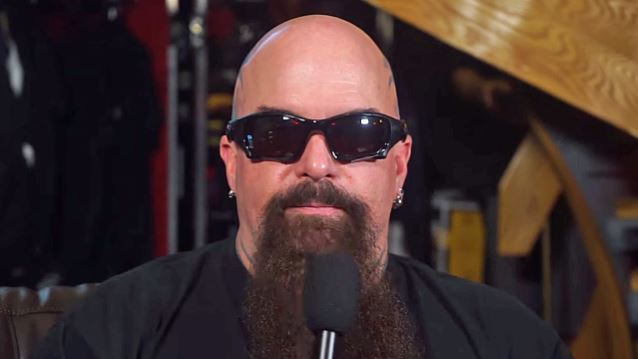 SLAYER guitarist Kerry King says that the organizers of the annual Rockstar Energy Drink Mayhem Festival "tried to reinvent" the event this year and "didn't put enough thought into it," resulting in poor attendance figures.

In a recent interview with Metal Insider, King criticized this year's edition of Mayhem, saying: "Do I know this tour wasn't booked correctly? Absolutely I know this tour wasn't booked correctly. Gary Holt [SLAYER guitarist] made the comment that usually there's the Main Stage, a second stage, a third stage, and then that piece-of-shit record stage… Now what they're calling a second stage is at best a fourth stage and they're wondering why people aren't showing up."

In a brand new interview with Louder Noise, King clarified his comments about the second-stage bands at this year's Mayhem but continued to criticize the festival organizers for putting together a less-than-viable package for the fans.

"I heard my crew saying stuff that's going on at the other stage," King said (see video below). "And people just get… They take my word like gospel. It's, like, dude, I have an opinion, and my opinion's fine — it's not fucking the end of the day. At the end of the day, is that a fourth stage? Absolutely, that's a fourth stage, and I've got nothing against any bands on that stage. The problem is, the problem with this tour is, Mayhem thought that the brand Mayhem would sell tickets, and it doesn't. You need talent to make people feel like spending that much money."

He continued: "We played the Eagles Ballroom [in Milwaukee, Wisconsin] last year with SLAYER, SUICIDAL [TENDENCIES] and EXODUS and sold it out. We did it on Mayhem [this year] and didn't sell it out. That's what I'm telling you."

Kerry added: "I think Mayhem, they tried to reinvent themselves this year and didn't put enough thought into it. They tried to downsize by taking away the second and third stage, and even though they charge less for the tickets, it's still not value for what people are getting from this, I don't think."

Mayhem co-founder Kevin Lyman told the Detroit Free Press about the festival's 2015 lineup, which also includes KING DIAMOND, HELLYEAH and THE DEVIL WEARS PRADA: "It was the best available for what we had to work with. We had pressure to keep the package at a certain price and make that work, and we had pressure on headliner expenses." In addition, there are fewer acts on the bill and only two stages this time around because "we had to condense it," Lyman said. "The expenses of putting on those shows had gotten high, so we had to push it all into the concourses. They [venues] don't want to build a fence outside [for third and fourth stages] anymore. Those things cost money."