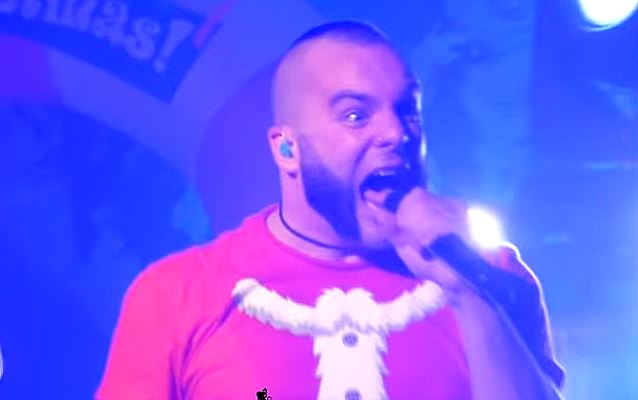 Massachusetts metallers KILLSWITCH ENGAGE paid tribute to iconic MOTÖRHEAD frontman Ian "Lemmy" Kilmister during their December 28 performance at Lupo's in Providence, Rhode Island. Check out the clip of the band drinking a toast to "one of the godfathers of heavy metal" during the show, which was part of KILLSWITCH's "Holidaze Rager" run of dates.

Lemmy had been dealing with serious health issues for the past two years, including getting a pacemaker in 2013 and suffering from a hematoma last year. But despite 40 years of hard living and drinking, he continued to tour and record at a feverish pace.

The band was forced to cancel or postpone a number of shows this year due to Lemmy's poor health, which also forced him to cut back on his drinking and give up smoking.

While MOTÖRHEAD itself was revered by metal and punk fans, Lemmy himself became a rock and roll icon and elder statesman, the embodiment of a musician who lived the rock lifestyle to the fullest and never stopped.

KILLSWITCH ENGAGE has set "Incarnate" as the title of its seventh album, tentatively due out in March on Roadrunner Records.