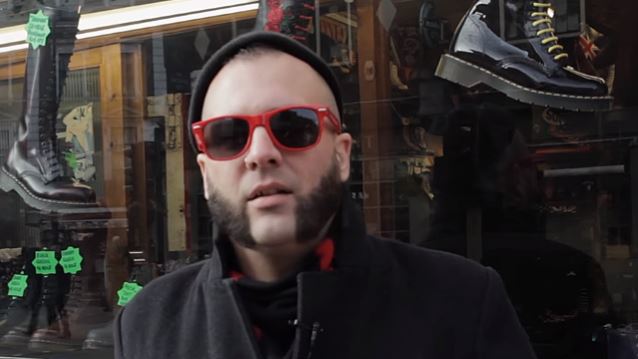 When KILLSWITCH ENGAGE frontman Jesse Leach visited London, England, Roadrunner Records took him on a punk tour of Camden, visiting the spot where THE CLASH practiced and shot their debut album cover. Roadrunner also spoke with him about his love for many different genres of music and how they have influenced him and his music. Check out the footage below.

In a 2013 interview with Noisecreep, Leach spoke about his love of early punk and hardcore. He said: "My brother got me into METALLICA. The first time I heard 'Blackened', it blew my mind, but it wasn't something that 100% spoke to me. I was looking for something else. That happened when I was hanging out with my friends in high school and they knew I was into METALLICA, NIRVANA and PEARL JAM and they asked me: 'Hey, have you ever heard this band MINOR THREAT? Or this band BLACK FLAG?' I remember hearing MINOR THREAT for the first time. I think the song was 'Seeing Red' and my mind was blown. I didn't understand what I was hearing. It was raw and pissed off. To this day, Ian Mackaye's voice is my favorite voice in hardcore. It just sounds so angry and the guitars sounded like that as well. I had never heard anything like before and I was hooked. I went right out and bought the MINOR THREAT discography CD that was out then: it was '92 or '93. From there I went into all different kinds of hardcore. BAD BRAINS, EARTH CRISIS, YOUTH OF TODAY, CRO-MAGS. That led me back into punk because I wanted to know where this music came from.

Regarding his pre-KILLSWITCH ENGAGE bands, Jesse said: "Interestingly enough, my first band was more a mixture of hardcore and rock. But vocally, I became more of a metal and hardcore vocalist because I always ended up playing with people who were already influenced by bands like INTEGRITY and DEADGUY; bands that played a mixture of styles. Even though I fell in love with hardcore and punk, I was always a vocalist who did a mixture of things — singing, screaming, yelling — the kind of vocals they now call 'metalcore.'"

KILLSWITCH ENGAGE's new album, "Incarnate", debuted at No. 6 on The Billboard 200, having shifted 35,000 equivalent album units in the week ending March 17. In terms of pure album sales, "Incarnate" opened with 33,000 copies.

KILLSWITCH ENGAGE's fifth studio album, "Disarm The Descent", sold around 48,000 copies in the United States in its first week of release to land at position No. 7 on The Billboard 200 chart.

KILLSWITCH ENGAGE has just completed a North American headline tour. Support on the trek came from MEMPHIS MAY FIRE and 36 CRAZYFISTS.