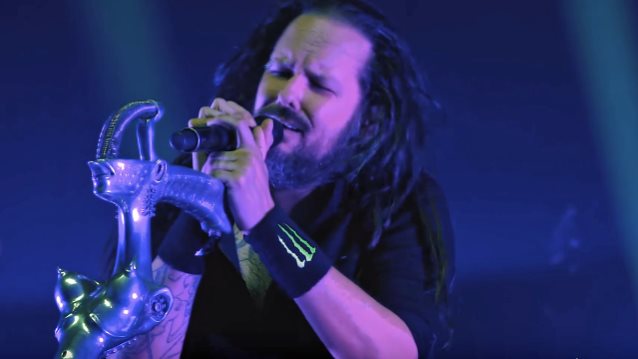 Veteran radio personality Jenn Marino, who in 2014 joined MÖTLEY CRÜE and SIXX:A.M. bassist Nikki Sixx as co-host of "Sixx Sense With Nikki Sixx" and "The Side Show Countdown With Nikki Sixx", recently conducted an interview with KORN frontman Jonathan Davis. You can now listen to the chat below. A couple of excerpts follow (transcribed by BLABBERMOUTH.NET).

On the meaning behind "The Serenity Of Suffering" album title:

Jonathan: "It comes back to my experiences throughout my life dealing with depression and the bad things that happen in life. It seems like that place is very familiar with me. I'm more comfortable in that space than when I'm happy. Let's say I'm happy all the time, but when I'm dealing with my art and my music, I deal with the bad things; I'm just like everybody else. We have good things and bad things. When I'm writing, I concentrate on the bad things. It just seemed to fit. I was going through some stuff when writing this record, and the title popped in my head. Usually Munky [James Shaffer, guitar] takes care of all that. Munky comes up with amazing titles, but this time, I came up with this and it just fit. This is what it means. People who deal with depression can understand what I'm talking about."

On the writing process in KORN:

Jonathan: "I need to have a song completely done. I guess I'm a little diva when it comes to that stuff. [Laughs] It dictates what I'm going to be feeling, emotions, everything. I need that. I need to have that landscape to inspire me to do what I do. Once the music is all done, I know exactly where to place my vocals and fill the holes and do all of that to make it work. I guess it's backwards.

"I am the last one always on the record to be done. They give me a window of two weeks because we have to go on tour or something. Also, being a father over the years, I take care of the boys all the time. When I get home, I give my wife a break and take the kids. I've learned to be really quick and efficient in the studio. I come in, the song is done, I listen to it, and usually I just sing the melody lines. I go into the studio and I spend two days doing all of the melody lines to all of the songs, then I come back, write the lyrics, then sing them. I do about a song a day."

On working with producer Nick Raskulinecz:

Jonathan: "I love Nick. He's an amazing human being. He tried to push me. [Laughs] He tried to get me in there, but, to be honest, I've always worn my feelings on my sleeve. Everybody knows I did not feel this record to begin with. I got the songs and I was like, 'I don't get it. I'm not feeling it. I know it's heavy. I know it's good.' But it took me a while. I do a melody line, I'm done, I sing the song and it's done. It wasn't like this on this record. I had to work really hard and I was like, 'I got to trust my brothers.' These guys busted their ass making this record. They love these songs, they believe in these songs, so I'm not going to be this bitch that's going to ruin it all. I just went in and I can say when I'm wrong and I was definitely wrong at that time. I was like, 'I don't think these songs are good.' So, Nick was there [going], 'C'mon, bro. C'mon!' He's a cheerleader, 'C'mon, bro, you can do this.' It took me a while, and then finally a switch flipped and all of a sudden things started flowing out of my brain. It took some time and took longer than they usually take, but it was good. Once it was said and done, and it still didn't hit me until the album came out and I listened to it… I went and bought the CD because I'm old-school. I threw the CD in my CD player and I listened to it. I'm old-school; I like vinyl, I like the old ritual of taking it out and holding something, putting it on a player; we're old. We're not new kids; we're way old farts. I went and bought it, sat down and listened to it, and went, 'Oh, this is an amazing record. What the hell was I thinking?'"

On Nikki Sixx joining KORN onstage for a rendition of "Blind" in Switzerland this past June:

Jonathan: "It was surreal. When I was 16 years old, I had a MÖTLEY CRÜE birthday cake for my 16th-birthday party. I told him and Tommy [Lee] and the other [MÖTLEY CRÜE] members, but I'm really close with Tommy and Nikki, but that was the beginning of me starting to like heavy music. Unfortunately, my family turned born-again and they took all of my MÖTLEY CRÜE tapes and burned them. I was in seventh grade, I think, that was the band that turned me on… I like that dark[ness]. Then it got taken away from me, and I switched to something totally else. My dad had no clue. I got into dark industrial gothic music like CHRISTIAN DEATH and old-school MINISTRY and stuff like that. That was the band and I had that birthday cake and it was surreal to be onstage and look over and see Nikki Sixx playing bass with KORN. He was rocking out and coming up and doing his thing... It was an old dream come true. Like, 'I can't believe this. I'm playing with one of my heroes.'"

On the lack of "beef" between current rock and metal bands these days:

Jonathan: "That's because a lot of the bands that are at our caliber of musicianship are dying. There's not that many of us left. [Laughs] I'm just saying the way things are done now just isn't there. So all of us have this camaraderie going on. We're the last guard. We've gotta stick together. [Laughs]"

On KORN helping their fans deal with personal issues:

Jonathan: "That's the biggest thing why we keep doing this — to see the positive impact that it has on people's lives. There's a lot of people out there hurting and music is something that heals. It's universal. It's one thing in this world we can agree upon, is that we all love music. It feels good to see people happy. When we were young kids just destroying ourselves, just like MÖTLEY CRÜE in the early days, we didn't care, we just wanted to get hammered and forget everything and live this crazy lifestyle, but as we got older it turned into something, like, 'We're helping people, we're helping kids get through stuff.' We get to play and do what we enjoy doing and we get to help people in return. That's better than any money or anything else that comes along with this. It doesn't matter; what matters is seeing people happy and people coming to the shows and people we've seen for years, and then their kids having kids now too, like a new generation of KORN fans. Like, what's going on? Wow."

"The Serenity Of Suffering" was released on October 21. The follow-up to 2013's "The Paradigm Shift" marks the band's return to Roadrunner, which previously released 2010's "Korn III - Remember Who You Are" and 2011's "The Path Of Totality".