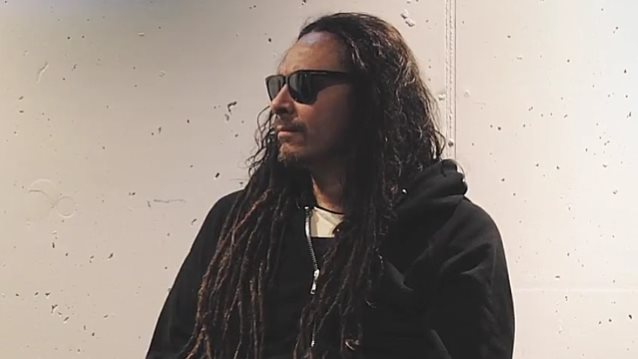 Sebastiano Mereu of From Hero To Zero recently conducted an interview with KORN guitarist James "Munky" Shaffer. You can watch the chat below.

Asked about the pressure that many modern bands feel to make their live shows as "perfect" as possible, Munky said: "I think it still has to be organic, it still has to come from a real place. I think as genuine as you can be and still being professional in the production side of things. You want people to come back. At the end of the show, you want people to [go], 'Wow, that was an amazing experience. I can't wait to see them again.' And maybe look at their tour schedule and go, 'Where are they going now?'… But also you have to come from an organic place; it can't look too rehearsed. It has to… Maybe not every song. For us, there's a couple of songs, newer songs, that we have a few backing tracks, but I'd say eighty, ninety percent of our setlist is all just organic band. We have a few samples, a few keyboard parts here and there, just to kind of… Basically, we're trying to get as close as we can to the recorded versions without making it sound… It's live music, so it…"

He continued: "When I go see a band, I like to see the inconsistencies in… I like when someone makes a mistake on stage. I don't wanna see the perfect… It's too robotic, it's too… Not too many mistakes, but it's always… It makes the show… There's a connection usually — human to human instead of it getting played on a computer. I don't know… That's just me."

KORN and STONE SOUR will join forces for a summer tour, set to get underway June 16 at the USANA Amphitheatre in Salt Lake City, Utah and then continue through early August.

KORN's latest album, "The Serenity Of Suffering", came out at the end of October. The track "A Different World" features a guest appearance from SLIPKNOT and STONE SOUR frontman Corey Taylor.