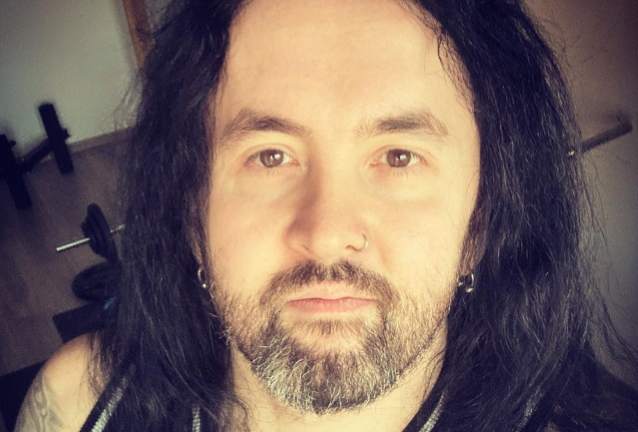 Frédéric Leclercq spoke to the "Thunder Underground" podcast about what it was like for him to join German thrash metal veterans KREATOR in 2019 following the departure of the band's longtime bassist Christian "Speesy" Giesler.

"I was pretty nervous, to be honest, when I went to the rehearsal room for the first time," Leclercq admitted (hear audio below). "Because I was just, like, 'Okay, I'm definitely the new guy.' Sami's [Yli-Sirniö, guitar] been here for, like, 20 years, and Mille [Petrozza, guitar/vocals] and Ventor [Jürgen Reil, drums] since the beginning. So it was very exciting, but at the same time a little scary — just like, 'Is it gonna be okay?' Because I knew Mille — I've known him for, actually, almost 20 years. But is it gonna be okay with the other guys? Are they gonna let me in? Or maybe they're gonna miss the other guy, and I'm gonna suffer. You know, like Jason Newsted with Cliff Burton kind of thing. I had no idea. And we played the first two songs — 'Violent Revolution', and then we went into 'Extreme Aggression' — and it felt like I'd been in the band for a long time. And everybody was really happy. So that was just, like, 'Phew, okay. That's cool. That's all right.' Then, a couple of days after, I was at a party that Ventor threw, and we were just talking as if we knew each other forever. So, on a human level, this is awesome. And on an artistic level, it's great as well."

He continued: "I kind of warned them before — I said when it comes to writing music or throwing in ideas, I get very enthusiastic and I tend to go, 'Yeah, this is how it works,' and whatnot. Not that I like to be a dictator, but it's just that I feel very, very confident when it comes to music. And I was afraid that maybe it would be annoying for them, or also they would tell me just, like, 'You, calm down. New guy, shut up.' But actually, they're asking me, 'So what do you think?' They definitely opened the door. Obviously, when I think of it, when I try to analyze the situation, I'm still the new guy, and that's fine, but it's definitely not how it feels. We are definitely like a family, and they don't make me feel like I'm the new person or whatnot. And it's also very refreshing for them, I think, 'cause it always is when there's new blood in the band. And we're all very excited."

Leclercq also spoke about the songwriting process for KREATOR's follow-up to 2017's "Gods Of Violence" album.

"We worked on new songs the whole summer — July, August, September and October," he said. "And it's great. It sounds good. I'm throwing in ideas. We're arranging the songs together. And we are very excited. I'm very excited for people to listen to it."

According to Frédéric, the coronavirus pandemic hasn't been as devastating for KREATOR as it has been for many other bands.

"For a machine like KREATOR, it needs to roll all the time," he said. "So you release an album and then you go on tour and whatnot. Otherwise, there's no real point. The good thing for us is that right now we are in that part of the curve when we were supposed to not really tour or do any gigs and work on the album. So I wanna say that the COVID is not hurting us too much. We only had to postpone a European tour and some shows; like, we were supposed to headline a festival in Mexico. But that's about it. So it's still okay for us. And that's why we're taking our time. And we just wanna make sure that this new album is gonna be great."

KREATOR played its first show with Leclercq in October 2019 in Santiago, Chile.

Before joining KREATOR, Leclercq rose to fame with U.K.-based extreme power metallers DRAGONFORCE for whom he handled bass duties from 2005 until August 2019.

In March 2020, KREATOR surprise-released a new single, "666 - World Divided". The song was produced by Andy Sneap and Markus Ganter and was recorded at Hansa Tonstudios in Berlin, Germany.

The music video for "666 - World Divided" was created under the direction of Jörn Heitmann, who was responsible for the music videos for "Radio" and "Ausländer" by RAMMSTEIN.

KREATOR's previously announced "State Of Unrest" European tour with LAMB OF GOD has been rescheduled for 2021 in the wake of the coronavirus (COVID-19) pandemic.

KREATOR released a new live set, "London Apocalypticon - Live At The Roundhouse", in February 2020 via Nuclear Blast. The effort was professionally filmed and recorded on December 16, 2018 at the Roundhouse in London, England.