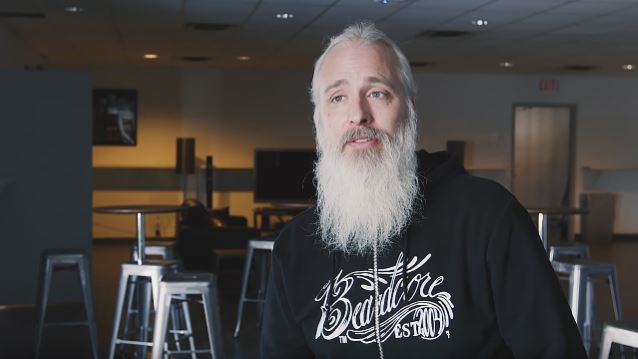 On May 19, Exclaim! TV 's "Aggressive Tendencies" conducted an interview with bassist John Campbell of Richmond, Virginia metallers LAMB OF GOD in Toronto, Ontario, Canada. You can now watch the chat below.

Speaking about the songwriting process for LAMB OF GOD's latest album, "VII: Sturm Und Drang", Campbell said: "It was pretty much the same process that we'd used before, this was after some difficult times in the band's history. What I remember most about it is just being really happy to be back to work."

He continued: "Our goal with every record has been to do better than the one before and just push ourselves as hard as we can with everything we had learned up to that point, and I think that 'Sturm' falls right in line with that. We stretch ourselves and try to do something different, maybe unexpected, for ourselves, purposefully stepping outside the box, and I think 'Sturm' hit all those marks incredibly well. I think it sonically sounds amazing, and I think they're by far our best songs."

"VII: Sturm Und Drang" was released in July 2015 via Epic in the U.S. and Nuclear Blast Entertainment in all territories outside of North America. The CD was once again produced and mixed by Josh Wilbur with engineering by Wilbur, Nick Rowe and Kyle McAulay, and was recorded at NRG Recording Studios in North Hollywood, California and Suburban Soul Studios in Torrance, California.

LAMB OF GOD's third album, "Ashes Of The Wake", which came out in 2004 via Epic, was officially certified gold in February by the RIAA (Recording Industry Association of America) for sales in excess of a 500,000 copies. (Note: Effective February 1, both on-demand video and audio streams are now included in the RIAA's certifications, with 1,500 streams counting as the equivalent of ten track sales or one album sale. And now 150 streams equal one download, rather than the previous 100.)