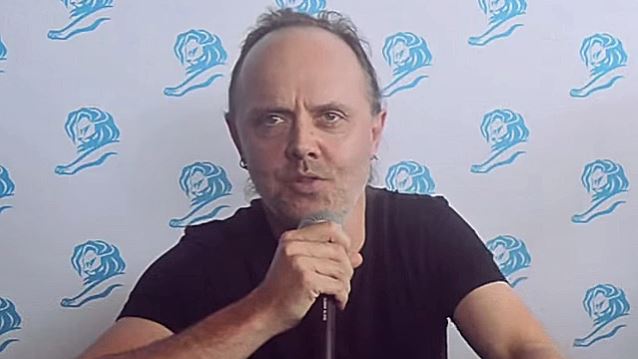 METALLICA drummer Lars Ulrich took part in a discuss panel discussion at the Cannes Lions festival on Monday (June 22) titled "Music And Brands: Moving At The Speed Of Culture". Video footage of his appearance can be seen below.

Ulrich said METALLICA accepts one in 20 approaches by brands for commercial deals. He explained: "You just sit there and get presented with a lot of options. I would say that we say yes to one out of 20 things."

He continued: "It's about timing — who the brand is, what they're offering. It's pretty straightforward: Is it someone you want to get in bed with or not? Mostly it's not."

Ulrich also rejected suggestions that doing sponsorship deals had made them feel like sellouts. "I think we've done pretty well," he said. "I sleep pretty well at night, and I think we've kept the credibility well intact. But it's a different situation from 20 years ago. You have to be adaptable."

Asked what he thought about advertisers (meaning people who make ads), Ulrich replied: "I think there are a lot of good people in adveristing that are just doing their jobs. That's their passion and that's their particular calling in life. I don't know if I have a manifest-like way of looking at advertisers. I think that… obviously, when it relates to METALLICA… When you make music, there's a creative process, and part of that creative process is that you really… I think it's just a human element. It's like when you do something that's creative and that you're excited about the human factors that you wanna share it with other people. It's not necessarily you wanna make money, it's not necessarily that you wanna show off… There's, kind of, a basic, like, almost childlike… It's like when a child makes a drawing, it just wants to show it to all the other people in the room. So when creative people undertake their creative endeavor, they just wanna share it, and that's where advertisers come in at different levels. And so, when you throw these words around, like 'brands' and 'advertising' and all the other stuff that you guys have been hearing for days here and will continue to hear for the rest of the week, they're just, kind of, generic terms, but, obviously, you wanna get your stuff out to people."

Cannes Lions is the world's biggest annual awards show and festival for professionals in the creative communications industry.