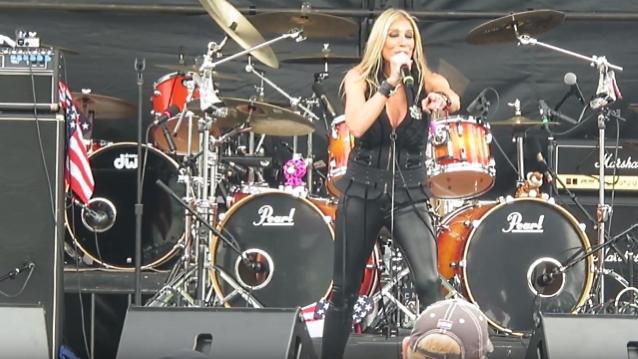 Clint Switzer of the "Music Mania" podcast recently conducted an interview with VIXEN frontwoman Lorraine Lewis (also of FEMME FATALE). You can listen to the entire chat below. A few excerpts follow (transcribed by BLABBERMOUTH.NET).

On joining VIXEN in January:

Lorraine: "First of all, I'm so honored and excited to be a part of VIXEN. They are a staple in rock and roll and metal and chicks that rock. I'm super honored to be with them and to be even asked to step in was a great honor. I'm hoping that I'm doing a good job and hoping I'm doing the songs justice, et cetera. I am loving being with the girls. I have history with the girls, for sure. I go way back with them. We were all getting record deals around the same time back from the Sunset Strip days. It's just amazing to go full circle, then be able to hang out with these girls 30-plus years later. I feel like it's a big slumber party every time we're together. It's super fun."

On whether it was "easy" for her to step in and replace original frontwoman Janet Gardner:

Lorraine: "As far as I know, VIXEN being Share [Ross, bass] and Roxy [Petrucci, drums] at this point, the original members, they never want it to end. They were definitely looking to the future and 'Okay, what are we going to do if Janet bails? If Janet decides to do something different?' it was kind of a teaser for me, doing the Oklahoma show [in 2018]. I really enjoyed it so much. It was kind of one of those things where it was too weeks in the making. They called me two weeks before they went on the Monsters Of Rock cruise 2018 and said, 'Hey, Janet might not be doing this show. Would you be able to do it with us?' Because she had the aneurysm. I said 'Look, let me look at the material. I definitely want to help you guys out.' Janet definitely sings a lot higher than I do naturally. Janet has got an angelic voice. I'm a little bit lower vocally and a little bit raspy, and just a little bit different kind of a singer. I was a little nervous, to tell you the truth. I was like 'Oh dang. How am I going to take over for Janet Gardner?' I really did my homework. I really spent a lot of time with the songs because I really wanted to do the best job that I could do. I learned them all and did the Oklahoma show, and all in all with no rehearsals or anything, it came off without a hitch. That was the beginning; that kind of set the groundwork for the possibility of working together in the future. I wasn't really thinking that anything more was going to come out of it. I just thought 'This is just a one-off and that's it.' Then when they contacted me in January and said, 'It looks like Janet might be leaving. What do you think about joining VIXEN?' Number one, I was over-the-moon excited, then nervous as all hell. Because I was like, again I'm not Janet Gardner. I'm Lorraine. I know how to sing like Lorraine. I definitely do my best to honor the songs and do my best to sound, give the songs Janet's flavor, but it's still Lorraine singing Janet Gardner. That's just the truth. I know that I'm doing the best job that I can. I hope the fans love what I'm doing. Then we're looking to get some new music together so that's a merger of the two camps, basically FEMME FATALE and VIXEN and adding Britt [Denaro, guitar]. We're going to be a whole different machine once that starts as well, still honoring the VIXEN sound."

Lorraine: "I'm super flattered, super honored that they even brought it up. I was not going to push the issue at all. I mean, I'm stepping into VIXEN. This is VIXEN's deal; this is VIXEN's show. VIXEN is the forefront of women in rock. Aside from THE RUNAWAYS, this is the only all-female band that I ever knew of was VIXEN. I'm definitely stepping into their camp and want to honor their camp the best as I can. At the same time, I'm just flattered that they want to do a couple of FEMME FATALE songs. They were hit songs. So it's really a cool thing to have VIXEN…I turn and I look and I see Share rocking to 'Waiting For The Big One' and I hear Roxy on drums with those fills and it's effing awesome to see it and have them playing those songs. They play them impeccably. I just feel really, really happy. It feels really good. Britt doesn't miss a lick. She's an amazing guitar player. All of the solos from the VIXEN songs she's nailing. She does the same thing with the FEMME FATALE songs. It's very cool to have VIXEN performing FEMME FATALE. It's very cool. I don't think that people knew that was going to happen. It's kind of a surprise when you come to a show."

Prior to Lewis's addition to VIXEN, Petrucci, Denaro and Ross vowed to "expand upon the VIXEN legacy while remaining true to our musical roots."