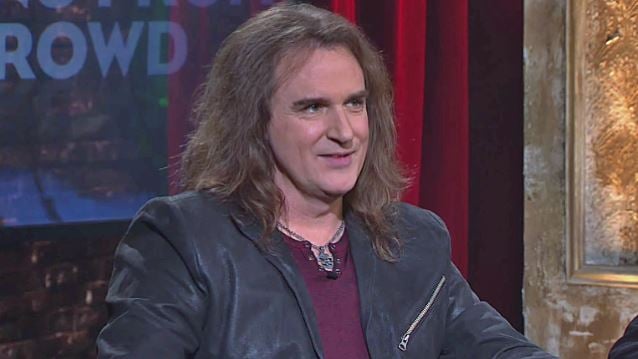 MEGADETH bassist David Ellefson stopped by for a question-and-answer session at the Mesa Community College's Summer Band Camp last Wednesday, June 3 in Mesa, Arizona. He discussed his musical education, how it influenced his career, and he offered some advice for younger musicians wanting to pursue music as a career path.

Speaking to Miguel Rozo, Ellefson said about his musical education (see video below): "Especially in rock and roll bands, you know… rock and roll is sometimes just formed on an excuse to just not have to get a job and rewrite the rules and rocking out against society and school and all these things. So people will pick up an instrument for a variety of reasons — sometimes it's just to have a voice, because they feel like in their life they don't have a voice. And for someone like me, I started to be formally trained, though church-organ lessons and then through the tenor saxophones. So by the time I got my hands on a bass, I could read and write music… Read it, I should say — I could read music. But I think getting some formal education really helps."

He continued: "I remember reading about THE BEATLES, talking about how they, kind of, grew up in the pubs and the clubs, and there came a point even in their career, making records, where they would bring in other orchestra musicians and various people to be on their records. And when they learned how to speak the language rather than just, 'Third fret, E string, dude,' but being able to say, 'Let's play a G major chord, and I'll play the root and you play the fifth,' and being able to talk in a little bit more proper musical language, I think it only helps your experience. It helps you be less frustrated, it helps you be more economical with your time, especially in the studios, where time really is money."

Ellefson added: "I think being able to understand music and interaction… It's probably the best thing I enjoyed about playing in an orchestra band and a jazz band — you really learn to play with dynamics. Rock bands, it's just, 'Turn everything louder than everything else,' as it's been said, but, you know, really playing with dynamics… And even in a group like MEGADETH, we play with a lot of dynamics. With everything loud all the time, nothing seems loud anymore. If everything is fast all the time, you sort of get numb to the impact of accelerated tempo. So I think understanding things on a musical level helps you be certainly a much better composer and definitely a much better performer."