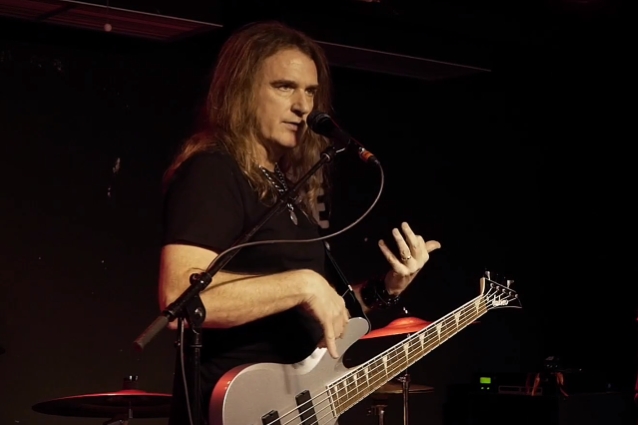 At the first stop of the European leg of his "Basstory" tour at Rough Trade in Bristol, England on October 15, MEGADETH bassist David Ellefson explained why he started playing with a pick/plectrum instead of his fingers. He said (see video below): "Your signature sound comes from the hand you sign your signature with, which is usually the hand that we strum our instrument with. And for drummers, it's probably the opposite, because it's a snare. That's why drummers, when they get signature instruments, it's usually a signature snare, because that's really… When you think about it, Kenny Aronoff, Alex Van Halen, some of these guys, as soon as you hear [a song on] the radio, wham! You can tell within one measure — 'I know exactly who that artist is,' 'cause of the way the guy is hitting the snare drum. But I think for us string-instrument players, it's mostly right here [in the strumming hand]."

He continued: "For me, I ended up picking up a plectrum, a pick, mostly because you guitar players are always too loud. And I was in bands where I could afford amps about that size [points to a small amp], as a kid, and I couldn't afford big Ampeg SVTs and big stuff like that. And guitar players would get 50-, 100-watt Marshall half stacks and we would have to turn them against the wall, 'cause they were so loud. Because the sound man, when he does this [lifts arms above his head an shakes his head], that means the P.A. is off, you're not in it and you're too loud. And most guitar players go, 'Fuck that, dude! I'm gonna fucking play loud.' Pardon my language, but that's just kind of how guitar players are. So in order to compete with that, I picked up the plectrum, because when I got in a band, all of a sudden, that got in the mix; now I was in the room finally and got inside the kick drum. I learned that later making records about how to get my bass kind of right inside that kick drum, so as the drummer… as that beater hit the skin, that was the cannon and I was the cannonball right behind it. But that really is my philosophy."

Ellefson's latest comments echo those he made back in 2015 when he told EMG that he "chose a pick 'cause as a young teenager I was always playing in bands with very loud rock 'n' roll guitarists, and in order to compete with them — I had my little 2x12 cabinet and a 100-watt head — I found that with a pick I was able to get a tone and dig into the notes. It was the attack. It cuts right through," he added, explaining that pick playing was of great importance for acquiring the desired sound for MEGADETH, allowing him to "pick up the guitar lines," as well as just groove the root note.