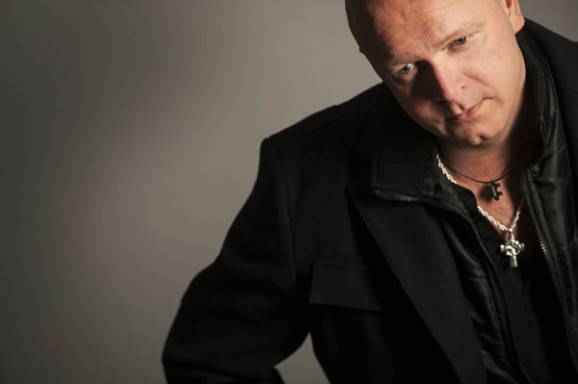 Thomas Schwarzkopf of Myglobalmind webzine recently conducted an interview with former HELLOWEEN and current UNISONIC singer Michael Kiske. A couple of excerpts from the chat follow below.

Myglobalmind: What is the current status on the new UNISONIC album?

Kiske: Songwriting. Basically, we're all writing songs and we also have to wait for Kai [Hansen] until he gets done with his GAMMA RAY [new album] production, which I think will be finished somewhere around November. I just wrote three songs together with my best friend, actually, for UNISONIC. I can write songs together with him very well. We can't exactly say when everything is done, but the goal is to have a new record released in early summer, you know. So, we are already booking festivals for next year. It would be great to have a new record out then.

Myglobalmind: After you left HELLOWEEN, you know many metalheads were offended about your statements about heavy metal in general.

Kiske: It was not about metal, it was just about the satanic crap that goes on there. The thing is there was a lot of anger in me, because of bad experiences. I was very disappointed about how things went down with HELLOWEEN and then I was doing my records and certain critics were just bitching about it because I was not trying to sound like HELLOWEEN or whatever. There were so many things that came together and maybe this disappointed how I felt about the scene and everything. I was always a very spiritual person and when I took my years off I was diving into books and I was reading and reading and I got even more spiritual, I got very serious about certain issues in terms of humanity and thinks like that and that made it even more hard for me to not be against certain satanic and inhumanity glorifying crap that goes on in that scene, but it's not the whole scene. The [average] heavy metal fan is quite sweet. I need to go on tour again, I need to meet audiences — see them, hear them and talk to them. In the magazines, it also looks like the majority of the hard rock and metal scene is satanic, but it's not. Most people don't give a shit about that stuff. It's just nice and sweet, it's just guitar music and they even agree with how I'm seeing things. I had that experience. My anger is gone. I'm still against these bands and these kind of things, because I think it's wrong. Even those people who put themselves on a stage and sing about hate and spit out this negative vibe, even they want love! When they have a girlfriend, they wanna be loved, they wanted to be loved by their mother when they were babies, you know it's just the same. They portray this cold image when they play like they don't have a heart but in the end every human being wants to be loved.

Myglobalmind: Of course, we are all humans. So now you are totally back on track, when it comes to metal and hard rock and all that stuff. My question is: which role did AVANTASIA played in this context?

Kiske: A very big role. When you look at the first AVANTASIA record we recorded in 1998 — that was in a phase where I was still pretty angry and I did not want to have much to do with the metal scene anymore. It was just the time where I wasn't ready, so I didn't want to do it at first. But I liked [AVANTASIA mainman] Tobi [Sammet], I just liked his attitude, I just liked the way he just called me up and he was just straight-forward and I liked his sense of humor and I just liked his personality. So I said, "OK, I'll do it, but I'll do it just for you and you call me Earny on the record." I know, it's quite funny, but in those days it was something I wanted to have there. When you look at it, how successful AVANTASIA got over all the years. We can headline festivals all over the world and play venues with 4,000 people, which not many bands can do. It's beautiful and the thing is: 2010 I said finally "yes" to play live with them. Tobi asked me before the first tour, because I was part of the first record already, but I wasn't ready. He offered me a lot of money, but I turned it down, because I just wasn't ready, I didn't want to go on tour. But in 2010, I said, "Yes, OK." That was like medicine to me, it just felt right, and then there was Kai on stage and we started to talk to do something again and that's how UNISONIC got Kai into the band. So I'm now very happy to be part of AVANTASIA. It is just too much fun to tour the world with them. It was the first time I got on stage again.

Myglobalmind: Are you satisfied how everything turned out in your career or are there some things you are still bitter regret?

Kiske: I must say that even the negative things have turned out good in the end. I learned a lot by it and I've grown as a person. There is just one thing I find very sad and that is I think that the HELLOWEEN of the "Keeper Of The Seven Keys" years with Kai Hansen, [drummer] Ingo [Schwichtenberg]… you know, the HELLOWEEN of the "Keeper" time was very short-lived. I think we just started and then it was over. I think we should have done at least two more records. That's the thing I find really sad. Bands like IRON MAIDEN, they've gone full circle, you know. The have had their peak and they made their best records, they have told the story. They have said everything that they can say musically, in my opinion. HELLOWEEN… I mean HELLOWEEN of the "Keeper" time, because today's HELLOWEEN is a different band… I think the HELLOWEEN of that era, we never really said everything we had to say artistically, and that's very sad.

Read the entire interview at Myglobalmind.