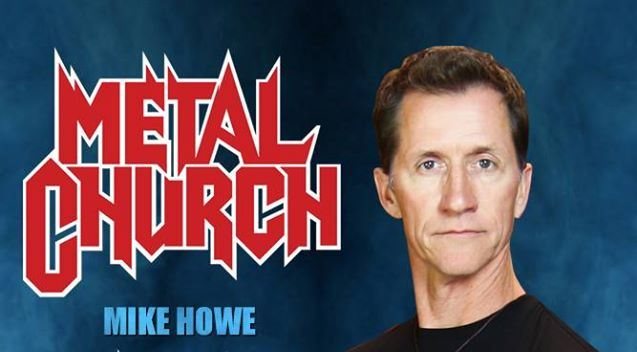 myRockworld conducted an interview with METAL CHURCH lead singer Mike Howe prior to the band's June 13 show at Backstage München in Munich, Germany. You can listen to the full chat below. A few excerpts follow (transcribed by BLABBERMOUTH.NET).

Mike: "I left METAL CHURCH because of managerial and record company and outside pressures that were putting METAL CHURCH in a position that was not to my liking. They were ruining the band for me business-wise. Small examples like the record cover of [1993's] 'Hanging In The Balance', which was something that I did not approve of and something I did not like at all. And so… [Laughs] It's okay if you like it, but for me, it was not something that I liked. Things like that, the way it was recorded and mixed and the pressures put on me and to push me in ways that I didn't want to be pushed, so things like that. It came to a head to where this is not the band I envisioned and Kurdt [Vanderhoof, guitar] envisions and we're basically being bullied around by a management company that doesn't understand us. They think they know better than us. I was like, 'This is it. I'm getting off the ship before it goes down.' That's why I left, but I came back for that exact reason. Kurdt called me up; Ronny [Munroe] left the band and he said he didn't want to carry on with a fourth singer of METAL CHURCH. We talked about what our ideal METAL CHURCH would be and that would be to come and write some new music, powerful music with no pressure from the outside, whatever it took, however long it took. From the beginning of the writing process to the mixing and all that of the album and the cover, it was all us and nobody else had any input or any outside pressures. Now we can blame ourselves for anything we're not happy with. We're very proud of that fact. It's sort of like a redemption for us, something that was unfinished business in our lifetime that we were lucky to revisit and get that chance to do that."

On the songwriting process for the band's 2016 album "XI":

Mike: "From the very time Kurdt and I talked, it was, like, 'Okay, I'm not coming back to METAL CHURCH for nostalgia.' I'm not a nostalgic guy. Yeah, they're great songs and I'm proud of that era, but I'm not coming back to re-live that era. I'm coming back because we need to write new music that's relevant and powerful enough to pick up where that left off and so that's what we did. He wrote basic structures and sent them to me over the Internet and I was, like, 'Wow! That's powerful.' When he wrote enough, I was, like, 'Let's get together now.' I flew to his house and we started sculpting them and singing melodies and writing lyrics and really refining them into the songs they are today."

On the differences between "XI" and the METAL CHURCH albums he recorded between 1989 and 1993:

Mike: "Musically, we picked up right where we left off. That's what I really felt is that we were still a great band with great, relevant music. I didn't leave because, 'Oh, we're not writing good music anymore.' I left because of outside influences. I really feel that the magic was recaptured again; our chemistry between he and I, so the writing process was the same. But, recording and doing it ourselves was different, obviously, because we had digital and it was a great resource to be able to cut and paste without having to just replay it all. It kept the creative juices flowing without stopping. That's a great tool to have those kind of things these days, the digital era of computers and putting songs in there and re-arranging them and things like that."

Mike: "Last year we did lots of shows here in Europe. All those big festivals and so we were recording those and so we took those and said 'Let's document the great year we had over in Europe and all the festivals.' We took the best ones and Kurdt compiled them together in the studio and we released them."

On choosing the songs for "Classic Live":

"XI" was released on March 25, 2016 via Rat Pak Records. Produced by Vanderhoof and co-produced by Chris "The Wizard" Collier, the band's eleventh studio release marked the return of Howe.

METAL CHURCH has recruited Stet Howland (ex-W.A.S.P.) to play drums for the band on all its summer shows. He joins the group as the replacement for Jeff Plate, who announced his departure from METAL CHURCH in March.