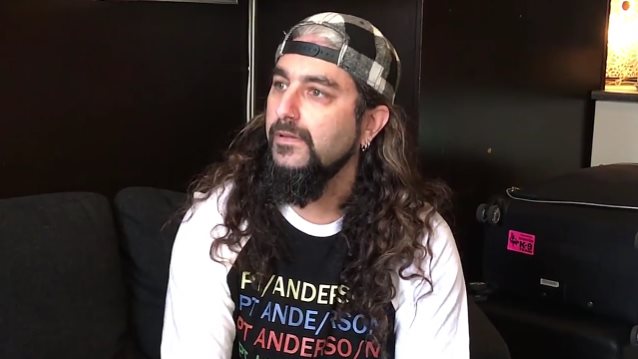 Dream Theater World conducted an interview with former DREAM THEATER drummer Mike Portnoy before THE NEAL MORSE BAND's April 1 concert in Malmö, Sweden. You can now watch the chat below.

Speaking about what it has been like giving up some of the creative control he had while he was a member of DREAM THEATER and adjusting to the more democratic environment of his more recent projects, Portnoy said: "I have a different take on what makes a band fun. To me, sometimes being in a band with four or five or six different chefs in the kitchen, it's a great creative process, but it's also incredibly frustrating. In all those years in DREAM THEATER, I very much had a lot of creative control, and John [Petrucci, guitar] and I produced the albums together and we wrote the music together, but then from that point, I had a lot of creative control. And there's something to be said for… The process is a lot easier that way."

He continued: "After I left DREAM THEATER, every band I've done — FLYING COLORS, THE WINERY DOGS, ADRENALINE MOB, METAL ALLEGIANCE, THE NEAL MORSE BAND now — every one of these bands are kind of democratic bands where everybody has creative input, and that's great 'cause you get a little bit of everybody in it, but it's also very frustrating. Every single aspect, there's like a hundred e-mails [going back and forth], and I'm in four or five different bands at a time, so every question for every band branches off to a million e-mails. So that's not fun; to me, that's not so much fun. It's a lot easier when you can make a decision and just move forward."

Despite the frustration that he sometimes feels as an equal member of a band, Portnoy says that he doesn't mind being part of a situation where everyone is involved in the writing and decision-making process.

"To be honest, after all those years with DREAM THEATER, I was very happy to be a team player for THE WINERY DOGS and FLYING COLORS," he said. "Actually, I'm very comfortable being a team player. I think I have this reputation of being a control freak, but no, I actually like working together. It just sometimes can be very frustrating and sometimes makes things take ten times longer than they need to."

Portnoy, who co-founded DREAM THEATER more than thirty years ago, abruptly quit the band in September 2010 while on tour with AVENGED SEVENFOLD. He has since been replaced by Mike Mangini (ANNIHILATOR, EXTREME, JAMES LABRIE, STEVE VAI).