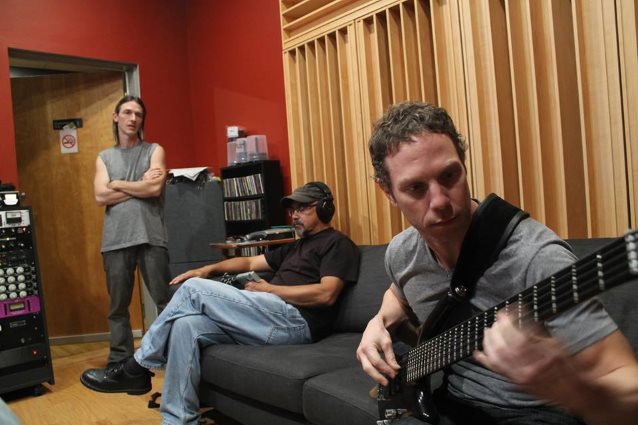 When Ryan Martinie and Bon Lozaga first met in Los Angeles and started talking about getting together to create some music, they didn't know what to expect. Now as SOFTEN THE GLARE, their music is evolving and constantly changing, bringing in elements from both their worlds and others. Currently their music is headed in an instrumental jazz/rock direction with elements of metal, funk, prog and a touch of chaos.

Martinie is known for his bass playing and songwriting for MUDVAYNE. Numerous world tours (including a stint with KORN), MTV awards and millions of records sold are part of his musical heritage. Bon Lozaga (GONG, TINY BOXES) is known in the jazz/rock world and jamband scene (playing with MOE. and UMPHREYS MCGEE) and has released over a dozen albums featuring such noted guests as Allan Holdsworth, Kai Eckhardt, David Torn, David Fiuczynski, with his various projects and has also toured throughout the world.

SOFTEN THE GLARE's lineup is completed by drummer Mitch Hull.

HELLYEAH frontman Chad Gray recently explained to Billboard why MUDVAYNE broke up after five studio albums together. He said: "I still love and talk to those guys, but it's like being in a relationship and all the sudden things just start to fall apart. MUDVAYNE was just dissolving. It became too much for all of us. It was no one person in particular's fault. We all have faults. It was crumbling beneath us. I chose to be an artist and continue to play in HELLYEAH."

It's been seven years since MUDVAYNE released its self-titled fifth album, which was barely promoted and sold weakly upon release.