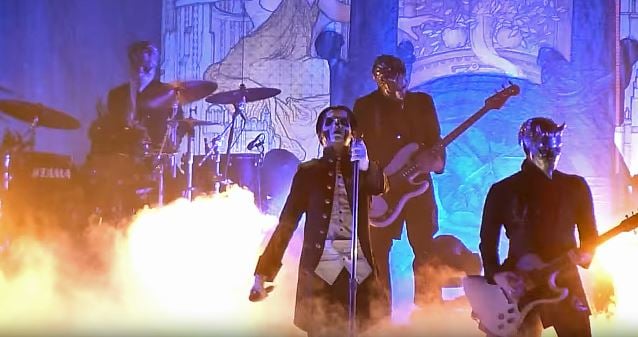 On of the Nameless Ghouls from Swedish occult rockers GHOST was recently interviewed on the U.K. digital radio station Planet Rock. You can now listen to the chat in the YouTube clip below. A couple of excerpts from the chat follow (transcribed by BLABBERMOUTH.NET).

On how the idea for GHOST's image came about:

Nameless Ghoul: "The idea was… I mean, obviously, now we've become a commercial entity, but in the early beginnings, it was actually very aesthetic… for aesthetic reasons. Especially [during] the build-up that led up to the first album, the idea was to possibly record one album and become a band that would maybe do a few festivals every year, go down to Roadburn [festival in the Netherlands] and do a 'Holy Mass' and then disappear."

On how they managed to keep their identities a secret in the early days when they were playing very small venues:

Nameless Ghoul: "We became very, very obnoxious prima donnas and demanded our own dressing rooms. We've blown it so many times. It's so hard, especially in the early days when we came to festivals. There was always someone who just accidentally opened up our door and [went], 'Oh, shit. I'm not supposed to see this, right?' Part of the intention with the band of being nameless or faceless or these just beings on stage was… My first time being in London was with my mom, coming here when I was 13, and two things that we did that really, really made a big impression was me was seeing [the musicals] 'The Phantom Of The Opera' and 'Cats'. And as a 13-year-old, going to 'Cats' is very interesting because of the cats. And it was a bit with that background, I had the idea that… I wanted, as an attendee at a GHOST show, you would have a similar feeling of not knowing, and that would, in turn, be a turn-on, I guess."

On the periodic changing/renaming of GHOST's frontman, Papa Emeritus, and accompanying costume adjustments:

Nameless Ghoul: "The thinking was, since we knew already very early that having this imagery, with the possibility of us making more records, is gonna seriously paint us into a corner. So we figured that, in order for this to feel like it's changing, we need to really come up with eras and themes in order to make it interesting. I mean, obviously, yeah, it's premeditated, it's thought through, it's sort of strategic. Obviously, there isn't a day when we are not wishing, for the sake of practicality, that we were just a normal band, in a way, because it's so much easier just to let your face do the aging. But the attention span of the world right now is so short, so… We also knew that one thing that will probably aid people to understand and cling on to what we do is to quickly create nostalgia by having eras. I mean, it's proved to be working, because people are very much clinging on to… 'Ah, I like the first more.' 'I like the second more.' And as crowds got more vivid and bigger, we felt that it might be well worth the risk in having a third Papa who's actually wearing pants, who's able to… I don't know… go down into the crowd. Because, as much as the sort of papal Papa looks cool, it's very impractical. We're surprised that he hasn't killed himself over the years."

On whether GHOST will ever pull a KISS and one day remove their masks:

Nameless Ghoul: "We have been completely accepting the idea of being revealed ever since we got our first record out, because we thought that it's just a matter of two shows and then someone will [be], like, 'Here they are. There you go.' And now, five [or] six years later, it's still sort of uncertain, which is to our surprise. And we want to differentiate between being masked and anonymous, and this is because of several reasons. Becase we don't feel very anonymous, because usually, after a show, there's always people outside our bus and we always sign things and we always hang out and all that. We don't take pictures, but we don't cut people off or shy away from meeting people face to face. But we will never do GHOST officially without masks. For the same reason I don't wanna see 'The Phantom Of The Opera' with their normal street clothes; that wouldn't make sense. We don't promise to have side projects where we will be anonymous and masked, and if that is a problem, tough shit."