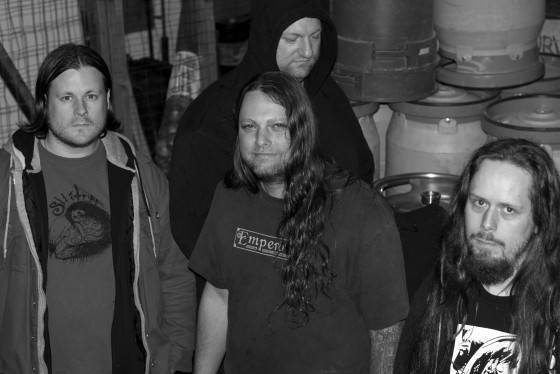 A389 Recordings has announced the signing of Arkansas-based underlords NAPALM CHRIST.

Formed in late 2010, NAPALM CHRIST unites a crew of longtime henchmen who have helped shape the Little Rock area extreme music scene over the past two or more decades.

Since the early 1990s, the four horsemen who form NAPALM CHRIST have collectively spent time at war with the mainstream in RWAKE, SHREDDING CORPSE, PALE UNEARTHED, SHITFIRE, WITCH'S TIT and others. In this cult, they unify their hateful ways and debauchery-ridden tactics into a volatile brew of charged-up, doom/grind-influenced death metal, reeking of days past, yet with enough potency to give fair warning of much darker days to come.

Initiated as a side-project, things got out of control, and NAPALM CHRIST began infecting the planet with recorded material, thus far accumulated in a series of random online demos, singles and comp inclusions. The latter of said demos was released via Bandcamp in June 2013, and that's when A389 caught a whiff of the band's trail.

Recorded by Alan Wells with assistance from Keith Bracy in Little Rock, and mastered by Collin Jordan at Boiler Room Mastering in Chicago, and masked with illustrations by Dennis Lee Hughes, this half-hour of disturbing anthems will be made available as an official 12-inch vinyl release, followed by a debut LP later in the year. Exact street dates on both releases will be announced in the coming weeks.