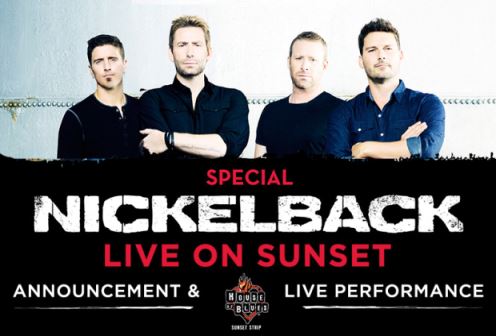 NICKELBACK will host a special live performance and announcement event on Wednesday, November 5 at House Of Blues in West Hollywood, California. This marks the first time NICKELBACK will bring its hit-laden arena rock show to the celebrated Sunset Strip venue. The performance will also be featured on The Live Nation Channel on Yahoo Screen at 6:00 p.m. PT. Fans can join NICKELBACK in the festivities by purchasing tickets at LiveNation.com on Thursday, October 30 at 10:00 a.m. PDT. All proceeds from the sale of tickets will be donated to the International House Of Blues Foundation Action For The Arts grants programs. These programs target high-need and under-resourced communities. They connect youth who would otherwise be unable to access resources with opportunities to participate in live music experiences and the arts. Join the conversation at #NickelbackLiveOnSunset.

NICKELBACK's eighth full-length album and inaugural release for Republic Records, "No Fixed Address", is due on November 18.

The new set will follow up 2011's platinum-selling "Here And Now". That album included the singles "Bottoms Up" and "This Means War".

The band plans to hit the road in early 2015 for a lengthy world tour in support of the new record.

Chad Kroeger formed NICKELBACK in 1995 in Hanna, Alberta, with his brother Mike on bass and guitarist Ryan Peake. Drummer Daniel Adair joined in 2005.

The group's second major label outing and third album overall, 2001's "Silver Side Up", was its commercial breakthrough, yielding the colossal hit single "How You Remind Me".

2005's "All The Right Reasons" spent 112 consecutive weeks in the Top 30 of the Billboard album chart, selling more than eight million copies in the U.S. alone and over 15 million copies worldwide.

NICKELBACK has been nominated for five Grammys, three American Music Awards, 12 Juno awards and were named "Group Of The Decade" by Billboard magazine in 2009.