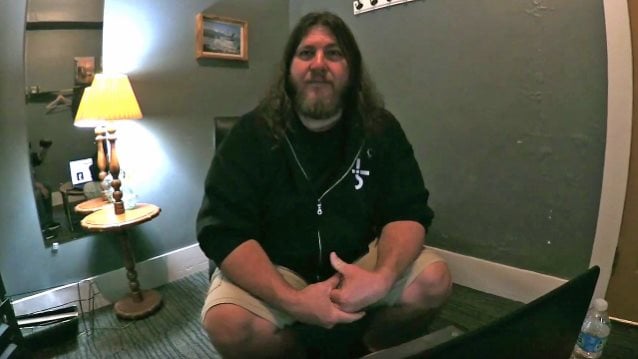 Eclectic Arts conducted an interview with OBITUARY bassist Terry Butler on March 28 in Seattle, Washington. You can now watch the chat below.

Speaking about how difficult it is for a band like OBITUARY to make a living playing death metal music in 2017, Terry said:"I often ask myself that, especially on the business side of things [laughs], because everyone wants a piece of you. The club wants 25 percent of your merch, there's state tax taken out of your pay, there's county tax, blah blah blah, and before you know it, you're, like, 'Why are we even doing this?' But that's just how it's always been. One good thing now is the Internet is great and bad at the same time. But with Pro Tools and everything, we can record everything at our house now completely on our own schedule and everything, which is great. But it does get tough when… We are trying to make a living at this, and we can make a living at it, but we have to work hard at it and be on the road a lot. And, like I said, everybody wants a piece of you."

He continued: "I've chosen this. For thirty years I've been doing this, and I love it. I love playing live. I love seeing the fans, talking to the fans. So I'm gonna do it until I can't do it anymore."

OBITUARY's new, self-titled album was released on March 17 via Relapse.

The band is currently taking part in the 2017 Decibel Magazine Tour with KREATOR, HORRENDOUS and MIDNIGHT. The tour kicked off on March 17 in Charlotte, North Carolina and will run through April 15 in Philadelphia, Pennsylvania.