Swedish progressive metallers OPETH will join forces with France's GOJIRA for a short run of U.S. dates in May.

The details are as follows:

Asked what the title of GOJIRA's new album, "Magma", means to him, Joseph Duplantier told Kerrang!: "To me, 'magma' is the primal energy. It's the blood of the earth. It's hot. It's dangerous. It is the guts. It's this music. It's the music we play. It's fusion. It's fire. It's electricity. It's… everything that we're trying to express with this music. That's what it means to me, 'magma.'"

Joseph also talked about how he comes up with all those heavy GOJIRA riffs. He said: "I don't know if we have a formula or a secret to write some of our riffs. But I wanna say that we connect ourselves to a certain energy, we put ourselves in a certain state of mind naturally. The kind of music we wanna hear, the kind of riffs we wanna hear are intricate and heavy and spiritual and there's a part of mystery in it. So we put ourselves in this kind of state of mind. But, really, we have visions when we play. When I've got my guitar, I'm already in a certain mood, and then everything that comes out will be in that specific mood. Yeah, I guess we're really connected to all… everything that's nature… Ideas like infinity, outer space, black holes [are] very inspiring for heavy riffs."

OPETH's twelfth album, "Sorceress", was released at the end of September.

For the band's first effort for Nuclear Blast via OPETH's imprint label Moderbolaget Records, the group returned to Rockfield Studios in Wales, also home to pivotal releases from QUEEN, RUSH and JUDAS PRIEST, where the Swedes had tracked "Pale Communion" in 2014 with Tom Dalgety

"It's got a little bit of everything," OPETH frontman Mikael Åkerfeldt told Guitar World about the album's musical direction. "There are some progressive moments, some jazz moments, some acoustic things. And even though it's not a death-metal record, it's still got some really heavy moments in there as well." 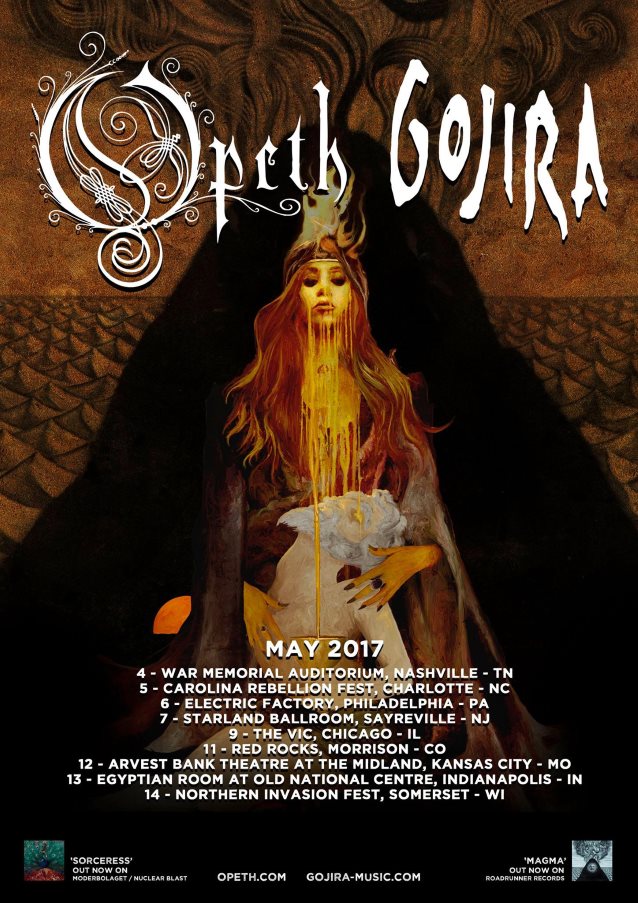