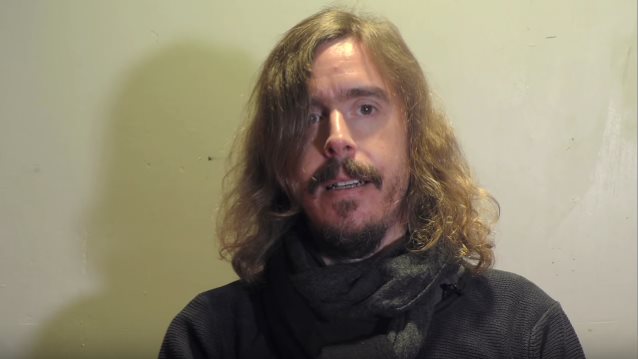 Holland's FaceCulture recently conducted an interview with guitarist/vocalist Mikael Åkerfeldt of Swedish progressive metallers OPETH. You can watch the full chat below. A few excerpts follow (transcribed by BLABBERMOUTH.NET).

On attempting to balance the creative aspect of OPETH with touring demands:

Mikael: "I don't necessarily like that there's no equilibrium between the creative work and touring. Even in the middle of a creative process, there's always tours and plans, like, 'How are we going to present this live?' It's disturbing to me. I've changed a lot, I think, but it takes a long time for yourself to discover that. You do things just out of routine. You do the record, then you go on tour. I'm one of those guys who listens to signals, like if I start disliking something, there's a chance I walk away, not saying I'm going to split up or leave the band, but re-arrange the priorities. For me, of course, my private life has become more of a priority. It's always been a priority, but more so that I want to spend more time at home, and spend more time writing. The touring part gets in the way of that."

On having a "fearless" attitude toward songwriting:

Mikael: "Once the 'Heritage' record was done, we were excited about it. We're always excited about a new record, but that was a step sideways, or something completely different to what we've done before. We were excited to see how that would go down. I guess we still wanted some type of gratification that we can do these things and still maintain our crowd. Yes, we did, but we also got a lot of people who didn't like it. Then, it becomes a priority. It's about proving them that yes, it does work and proving it's still OPETH. It's always been difficult for me ever since I had my children to leave and go away on tour and come back home. When the kids are really young, you come back and they are shy and don't recognize you, which as you could imagine, is horrible. Now my kids are older, but still, when we went on the U.S. tour and I explained to them, 'I'll be away for quite a long time,' and they are holding the tears back, even when they are 12 and 9, like they are now. Besides, I wasn't fully convinced that I wanted to go. There was a lot of things working against that decision, but I went out and did my job."

On if his children understand what he does for a living:

Mikael: "Yes, but they're indifferent. I think they're indifferent to what I do. They're not indifferent to the fact that I'm away. With time, they'll probably understand that I did this not for my own ego — part of it is for my ego and what I want to do — but I also do it for them. There is a big paradox, a massive paradox about doing something for someone that you love so much. You love your children, which also means you're going to be away from them. But they understand to a certain extent, they're used to it, but it's still horrible. I can't put it any other way. It's still horrible going away from them. I hate it."

On how making a new album means he'll have to leave his children to go on tour:

Mikael: "It almost stops me from wanting to get on with the creative side because I know the toll that comes with the press trips and the pressure, and you have to get everything done within time, and you have to work on a deadline, then you have to go on tour. So yes, it's bittersweet to come up with what you think is great music knowing that with this music, there's a chance it might make you even more in demand and popular. There's bigger demands and offers you can't refuse and that kind of stuff. It's weird. But like I said, I listen to what I feel inside. I've become better at saying 'No,' much to the agony of our management and perhaps the record label and the people we work with, who are also doing this for a living, who are also supporting their families by being away and working. I'm not so afraid, like an offer that comes up might be great, but I can turn it down now knowing it's not the end of the world, even that exact same offer might come back at a time where it's more convenient to go out. I also stopped the long touring cycles. We tried to keep it around three weeks. With that said, the first tour was five and that was one of the offers I couldn't say no because BLACK SABBATH were playing their last show in Los Angeles and we were asked to support them. It's like, 'You can't say no to that.' They're my favorite band; they're the reason why I started. The money was also good and we were going to be there anyway a week or two later, so I said yes. That ended up being a long tour. It's very easy to be manipulated to thinking you're doing the right thing or doing what you decided on, but then, it's like oh my God, you're back on the same old tracks. If I'm going to do this, it's part of the job, simple as that. I just want to scale it down a little bit and do less shows."

On how he felt once the band's new "Sorceress" album was completed:

Mikael: "I noticed two things: First, I was really happy with my vocals for two reasons: One, because I thought they sounded great. Secondly, because I managed to detach myself from the vocalist. I didn't listen to me, I listened to a singer. That's important for me. I don't want to hear myself in the mix, but I think I did a good job singing on the record. The songs, like I love change, but it doesn't have to be a massive change on each record or song, but there was change on this record. There was a couple of songs that I felt I've never done before, I've never done anything similar to that before. We can also jump between genres of music and make it sound genuine, like if we're trying to play something that's supposed to sound a bit jazzy, for instance, we can do it. It doesn't sound like a bunch of metal guys trying to play jazz, not that we have full-on jazz anyway. If it's psychedelic rock, it sounds like a psychedelic rock song, and if it's heavy, it sounds heavy, and it sounds real as far as I'm concerned. I don't think a lot of bands have the strength that we do; we can jump between genres and make it sound genuine."

"Sorceress" was released on September 30 via Nuclear Blast and the band's imprint label Moderbolaget Records.