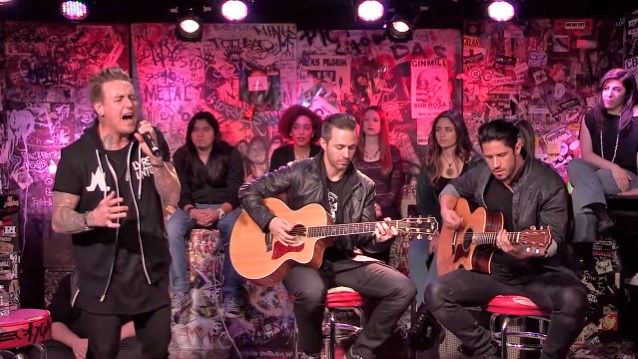 Californian rockers PAPA ROACH recently stopped by YouTube Space in New York to put on an acoustic performance of a few songs, including tracks from their eighth full-length album, "F.E.A.R.", which was released on January 27 via Eleven Seven Music. They also took some time to answer questions from their fans. Check out video footage of the event below.

"F.E.A.R." was recorded in Las Vegas, taking the band out of their Sacramento, California home base for the first time since 2006. PAPA ROACH worked with the father-and-son producing team of Kevin and Kane Churko on the new CD.

Frontman Jacoby Shaddix told The Pulse Of Radio that he wasn't very happy at first about going to Sin City to record. "I ended up in this city where I've had some of my greatest failures and worst decision making, and some of my biggest debacles of my life happened in Vegas, you know," he said. "And I believe I was sent back to that city to go do right this time, and we went there and I just faced that fear of living in this city that I felt was gonna eat me alive. But really and truly I just gave myself to this music 100 percent, and that's what pulled me through."

Shaddix admitted that the band went into the studio this time with almost no new material prepared, explaining, "Usually when we begin working, we'll have a bunch of demos, and I'll have a bag of lyrics ready to go. We didn't have those things this time."

Guitarist Jerry Horton added, "We walked into the studio with nothing. It was frightening since it was so different, but it was also liberating. Once the ball started rolling, it was a snowball effect."

PAPA ROACH and SEETHER teamed up for a co-headlining North American tour that kicked off on January 9 in Orlando, Florida and winds down on February 7 in Las Vegas.