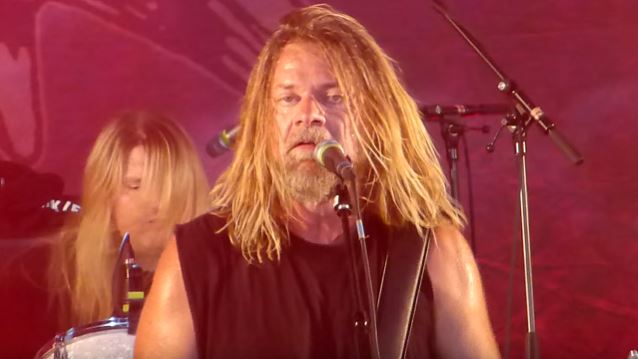 Jeff Blackburn of "Maximum Threshold" and "In The Pit" recently conducted an interview with DOWN guitarist and CORROSION OF CONFORMITY frontman Pepper Keenan. You can now listen to the chat in the YouTube clip below. A few excerpts follow (transcribed by BLABBERMOUTH.NET).

On the differences between writing music for CORROSION OF CONFORMITY and DOWN:

"The biggest difference with the C.O.C. stuff is that I'm singing, so my brain acts differently towards that writing songs for Phil [Anselmo, DOWN frontman] to sing. It's two different entities. I don't know how I split it in half, but I do it. I just go off the catalyst of what the last C.O.C. record was, which I thought was an extremely strong record. So we're just gonna shoot for that angle. And those guys have got a bunch of great riffs, and it's a different machine."

On the progress of the songwriting sessions for DOWN's next EP:

"We've got a pretty good direction of where we wanna head to and what the overall feel's gonna be of this EP. We've all got our riffs and certain songs that we wanna throw at each other and go from there. It's gonna be kind of an evolutionary part of DOWN on this third EP. So, yeah, we're excited about it."

On the upcoming EP marking the second DOWN release to feature guitarist Bobby Landgraf (HONKY) following the departure of Kirk Windstein:

"We've known Bobby for so long, you know. And another really big ace in the hole for us is Pat Bruders, the bass player. I mean, he was an outsider from the band for a long time that knew the band, but when he joined the band, he started throwing riffs around. Me and clicked off like nobody's business, you know. So he's got a super-deep arsenal of just insanely brilliant riffs and, basically, halves of songs and whatnot. So it's been a super-easy transition for all of us. 'Cause we're all in the same boat here, so we understand what we're supposed to be doing."

On whether DOWN still has plans to release an all-acoustic EP:

"I wouldn't use the word 'acoustic.' I would just say it might not be as bombastic as the other, first two EPs. But we'll see. All bets could be off. Who knows how we're feeling. But that's kind of the idea that we had. We've got some tricky, tripped out stuff heading your way."

On whether releasing EPs as opposed to full-length albums with DOWN has made things easier or "more crazy" for him:

"It's hard to say, man. We're kind of in an uncharted territory. When we came up with the idea of [doing] four EPs, everybody was, like, 'Man, that's crazy.' But then once we started doing it and coming out [with the first couple of releases], other bands [were, like], 'Man, that's a really good idea.' It allows us more freedom to shift gears in between EPs and it allows us more time to be on the road. It opens up a lot of things [that you can't get out of] throwing a [full-length] record against the wall and touring for three and hating each other at the end of a three-year worldwide tour. So it gives us more time to have a little bit of balance and experiment in different styles of music and different directions."

DOWN's latest EP, last year's "Down IV - Part Two", sold around 10,000 copies in the United States in its first week of release to debut at position No. 23 on The Billboard 200 chart.

Keenan played his first full show with CORROSION OF CONFORMITY since 2006 on March 7 at Manchester Academy 2 in Manchester, England.

CORROSION OF CONFORMITY's first European trek with Keenan back in the fold since 2006 marked the first time the "Deliverance" lineup of the band has played together since 2001.