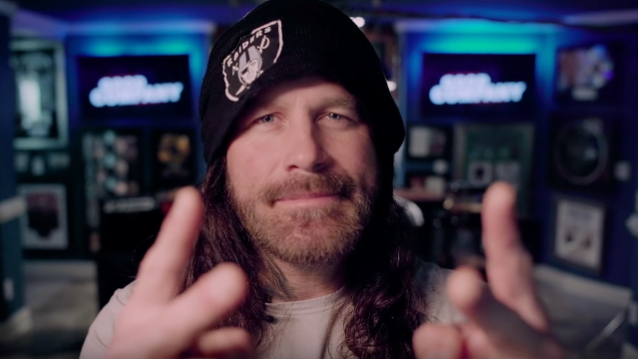 Former MACHINE HEAD guitarist Phil Demmel says that "Bastards", the folk-driven, political song which appears on the band's latest album "Catharsis", would have been better suited for a Robb Flynn solo project.

Originally released as an acoustic version on YouTube, "Bastards" is based on a conversation about white supremacy Robb had with his sons around the 2016 presidential election. In the track, Flynn uses certain racial and homophobic slurs, including the "N word" and the "F word" (not fuck), and it has been described as "arguably the most un-MACHINE-HEAD-like composition MACHINE HEAD has ever put to tape."

During a recent appearance on "Good Company", Demmel said that "Bastards" was a song that "only Robb wanted on the record. It was such a fight," he said. "He put it up on YouTube with him [singing and playing guitar]. I wish it would have been a Robb Flynn solo project, but that's kind of what this band is now."

Demmel went on to say that "Catharsis" — and album that he previously said he hates — was more about representing Flynn's vision of MACHINE HEAD, with minimal involvement from the rest of the group.

"I think there was a direction [Robb] wanted to go in," he said. "In the very early stages, I had a song me and Dave [McClain, drums] were working on, and it was kind of a thrash song. And Robb came in and he was, like, 'Nah, we're not gonna play fast on this record.' I got the sense that [it was] definitely something that we [were] not gonna do."

According to Demmel, his favorite thing about "Catharsis" is the way it was recorded. "We wrote in blocks — we wrote for some months," he said. "Where we rehearsed, the recording studio was just across the hall. So we wrote for a chunk, and we had, like, three or four songs, maybe five songs, and we'd go in and we'd record 'em and we'd jam 'em out. And I really thought that was a good idea. And it was fun. And we could work on parts. And the stuff was set up. And, 'Hey, I've got this riff. Let's go in and just record it.' The kid we recorded with, Zack [Ohren], was really cool. So, yeah, in that aspect it was cool."

Demmel announced his exit from MACHINE HEAD in October, explaining at the time that he wanted "to step away and do something else musically." Phil, who first played with the MACHINE HEAD leader in VIO-LENCE in the late 1980s and early 1990s, and McClain went on to complete the Flynn-fronted act's "Freaks & Zeroes Tour" last fall before officially leaving the group.

Last month, McClain told "Robb's MetalWorks" that he no longer believed in MACHINE HEAD's songs and musical direction toward the end of his tenure with the band.

MACHINE HEAD announced in March that it will celebrate the 25th anniversary of "Burn My Eyes" with a special run of shows. The dates will see guitarist Logan Mader and drummer Chris Kontos join the band onstage again to play "Burn My Eyes" in full.