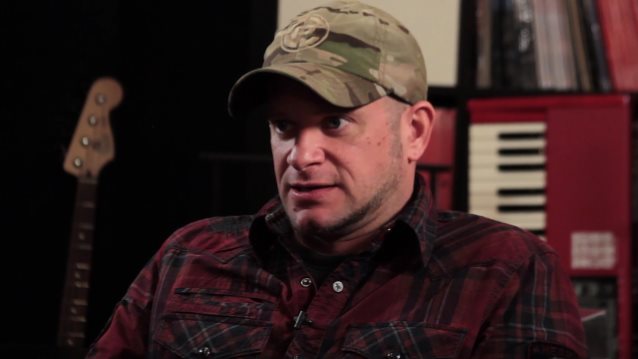 ALL THAT REMAINS vocalist Phil Labonte says that he was surprised by overwhelmingly positive reaction he got from FIVE FINGER DEATH PUNCH fans when he filled in for the latter band's singer at several shows last December.

Labonte fronted FIVE FINGER DEATH PUNCH for eight concerts during the band's fall 2016 U.S. co-headlining arena tour with SHINEDOWN after Ivan Moody "fell ill" and stepped away from the road to receive treatment.

Speaking to Revolver magazine, Labonte explained how he came to be asked to sing for FIVE FINGER DEATH PUNCH as a temporary replacement for his longtime friend. He said: "[Around the] holidays, [I] usually kind of chill out. But right after Thanksgiving, I got a phone call, [saying], 'Hey, can you get on an airplane?' So I got the opportunity to help those guys out.

"We've known the guys in FIVE FINGER since before they were even a band — I've known Ivan since he was in MOTOGRATER — so the fact that I could jump in and help out my friends, it was really cool. It was a lot of fun — a really good experience."

Labonte went on to say that he was "a little surprised at how well the fans responded" to his addition to FIVE FINGER's touring lineup. He explained: "Especially with a band like FIVE FINGER, with a frontman like Ivan, I kind of expected some people to be, like, 'If it's not Ivan, I don't wanna hear about it,' and I didn't get that at all. It was nothing but love and message of support and messages from people saying, 'Thanks' and 'Good job,' pat-on the-back stuff, which is always really, really nice to hear that you're doing a good job for your friends. So it was a great experience."

Prior to Labonte's first gig with FIVE FINGER, guitarist Zoltan Bathory said of the band's decision to finish out the tour with a replacement singer: "Ivan is our brother and we fully and wholeheartedly support him taking care of himself so he can get well as soon as possible. We discussed possibly canceling the remaining shows but the responses from the other bands on the tour were so overwhelmingly supportive that we decided to move forward and deliver the great night to the fans that they expect."

Labonte, a former Marine, once before saved the day for KILLSWITCH ENGAGE in 2010 when their singer at the time, Howard Jones, left the band mid-tour.

FIVE FINGER DEATH PUNCH was forced to cut a show in Worcester, Massachusetts in November short because Moody was unable to perform. Although it was reported that Moody was overcome with grief over the illness and possible death of someone close to him — not his mother as initially reported — a number of audience members reported that he appeared to be intoxicated and disoriented.

Moody previously had an onstage meltdown during a May 2015 show in Memphis. The incident was blamed on his abuse of alcohol and drugs. He entered rehab after that.

ALL THAT REMAINS's eighth studio album, "Madness", will be released on April 28 via Eleven Seven Music.