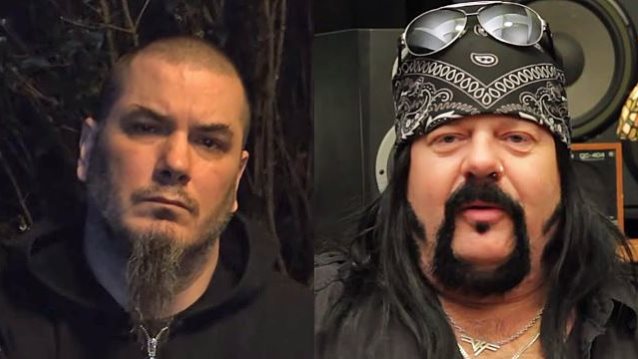 Philip Anselmo says that he doesn't have anything in common with Vinnie Paul Abbott at all, explaining that "anything out of that dude's mouth seems sour."

Vinnie Paul made headlines in October when he said that it was "sad" to see Anselmo doing "a lot of things" that have tarnished PANTERA's image in the fifteen years since the band's split.

The former PANTERA drummer's comments came during an interview he and his HELLYEAH bandmates gave to R7 before the latter group's September 7 performance at the Maximus Festival in São Paulo, Brazil.

Asked to comment on the fact that the former PANTERA singer was filmed earlier in the year giving a Nazi salute and shouting "white power" at a California concert, Vinnie Paul said: "I can't speak for him. He's done a lot of things that tarnish the image of what PANTERA was back then and what it stood for and what it was all about. And it's sad. But I carry on with what I do... And, you know, I can't control anything that goes on with that dude. I mean, honestly, I haven't spoken to him since 2000. So there you have it."

Now, in a brand new interview with Rolling Stone, Anselmo addressed Paul's comments publicly for the first time, saying "Yeah, I saw that he said that but anything out of that dude's mouth is ... ugh ... it seems sour. I don't have anything in common with that guy at all. But Vince better be caref– ..." He stopped mid-word and added: "One day I'm really not gonna care about whatever the legacy of PANTERA [is]. It's great that we had such an awesome fan base and still continue to have this awesome fan base, but there will be probably be a whole lot of 'em that would be perhaps a little disappointed in my assessment of the whole situation. So I'll just leave it at that. And that's why I'm not going to speak out about it, even though I know when this interview comes out, people are going to say, 'Well, you almost went off on that.' And yeah, almost. Operative word."

Anselmo told Rolling Stone he was careful with his words because he wondered about Paul's mental well-being, twelve years after the drummer's brother, PANTERA guitarist "Dimebag" Darrell Abbott, was shot and killed by a crazed gunman while performing at a Columbus, Ohio rock club.

"You have to worry about Vince's state of mind, just like you have to worry about all of our states of mind," Anselmo said. "I know in my heart I have to accept what happened to Dimebag because it's just real. He's gone. He was murdered. But there's a giant chunk of me that will never understand it. I've spoken to the police about it. I've spoken to the cop that was on hand that ended things, murdered the murderer. I'm not sure I'll ever understand it."

Dimebag's longtime girlfriend Rita Haney in 2011 called on Vinnie and Anselmo to settle their differences in honor of the guitarist.

Anselmo performed the PANTERA classic "Walk" at the January 22 "Dimebash" event at the Lucky Strike Live in Hollywood in honor of Dimebag. As he left the stage, he made a Nazi-style salute. He appeared to say "white power" as he made the gesture, but later claimed he was joking about drinking white wine backstage and was reacting to the audience members up front who he says were taunting him.