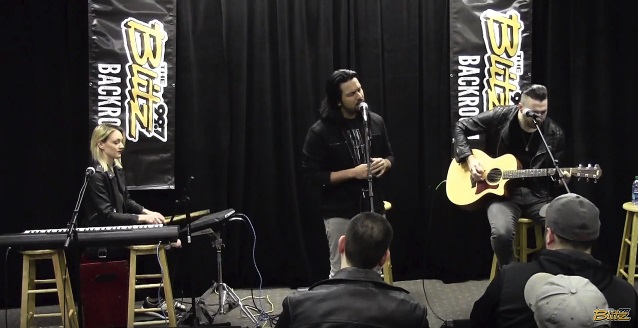 POP EVIL recently stopped by the 99.7 The Blitz radio station in Columbus, Ohio to play a short acoustic set. Check out video footage below.

The song "Waking Lions" is taken from POP EVIL's fifth, self-titled album, which was released on February 16 via Entertainment One. "Pop Evil" marks the recording debut with the band of British drummer Hayley Cramer, who joined POP EVIL in 2016 following the departure of Josh "Chachi" Marunde. The disc was helmed by veteran producer Kato Khandwala.

"As soon as we saw [Hayley's audition] video, we were, like, 'Oh my goodness. She's the one,'" singer Leigh Kakaty says. "Her first tour with us was in packed arenas opening for ROB ZOMBIE and DISTURBED. It was crazy, but when things work, they work. She's been like the big sister we never knew we wanted but we're so glad we have. And she's so passionate about the music. Songs that we'd been playing for years suddenly came to life in a different way and then she came in and killed it on this record. It was a rejuvenation for us. She's nothing short of a blessing."

Lyrically, songs like "Colors Bleed" cover new ground for POP EVIL. Instead of being about dysfunctional relationships, self-empowerment or mortality, Kakaty digs into today's headlines and addresses what he feels about capitalism, hypocrisy and violent confrontation.

"It was important for me to document things that we're going through right now, such as what happened in Charlottesville, what's going on with North Korea and where the government is at," he says. "As a lyricist, I need to address all sorts of subjects and emotions and politics is a part of that. I felt I needed to write about the things I'm feeling as a mixed American — someone whose mom and dad came to this culture with big dreams, hopes, and aspirations because this is the land of the free and the home of the brave. Anyone who comes to America is a native of this country, so it's so important that we all come together. When we join together, everyone wins.

"With a band name like POP EVIL, we felt like the 'evil' has always been de-emphasized just because of the situations we were in," Kakaty continues. "It always seemed like the people around us wanted to focus more on radio play or writing more mainstream, melodic stuff. That's definitely a part of what we like to do, but this time we made a rock album for rock fans. And, in general, rock fans are real Middle American, middle or lower-middle class people who get forgotten about. Secular music has pretty much told the world that rock and roll and metal music don't matter anymore. Having lived that life and thrived as a rock band, it's hard not to take offense to that, but it's important to try to be a part of the solution rather than the problem. And we're doing that by turning up the amps and saying, "Look, we can make heavy songs that really rock and we can also write catchy songs that someone who likes PEARL JAM or LED ZEPPELIN can get into."

In February, POP EVIL embarked on the "Music Over Words" tour, which served as the official kick-off for the new LP.