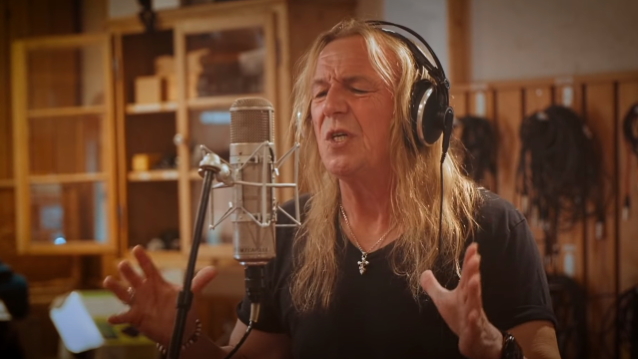 Vocalist Ronnie Atkins of long-running Danish hard rockers PRETTY MAIDS spoke to HardRockCore about how the rise of grunge in the early 1990s forced most hard rock bands off the radio and MTV, with album and tour sales plummeting.

"Looking back at the '80s and looking at all the hair metal bands, a lot of people are laughing when they see what clothes they were wearing, but hey, man, it was entertainment, and people had a good time," he said. "And that's important. That's what it's all about.

"I remember how the transition was, going from the '80s and the hair metal bands, and then GUNS N' ROSES — it was sleaze metal for a while — and then came the grunge," he continued. "And the first time I heard [NIRVANA's] 'Smells Like Teen Spirit' and PEARL JAM, I thought, 'Fucking great. It's great that something new happened.' But then when I look at it in hindsight, it was so depressing. It was so different from what came out of the '80s, which was party, rock and roll — sex, drugs and rock and roll — and then came this very introvert kind of negative attitude on stage, which, in hindsight, I don't really like it. I like the music, but it was more about committing suicide and being fed up with life and everything else, I guess. Some great albums came out of that, but you can't compare it to the '80s. I thought that the '80s were great fun."

This past February, Atkins announced that he was cancer-free — four months after he first public with his lung cancer diagnosis.

Formed in early 1982 by Atkins and guitarist Ken Hammer, PRETTY MAIDS quickly established itself as a band to be taken seriously. In April 1987, "Future World", the band's third album recorded in the USA, was released to great acclaim and is still today regarded as a "classic."

After the release of the follow-up album "Jump The Gun" (produced by DEEP PURPLE's Roger Glover), PRETTY MAIDS in 1991 were on the verge of a breakup. However, Hammer and Atkins found a new rhythm section and in 1992 released the "Sin - Decade", a record that would reveal that PRETTY MAIDS was still a force to be reckoned with, despite the fact that the metal scene now was overrun by the grunge movement. "Sin - Decade" became a huge success in Japan and gave the band a big radio hit with the single "Please Don't Leave Me", laying the foundation for the band in the East that would last for the next decade.