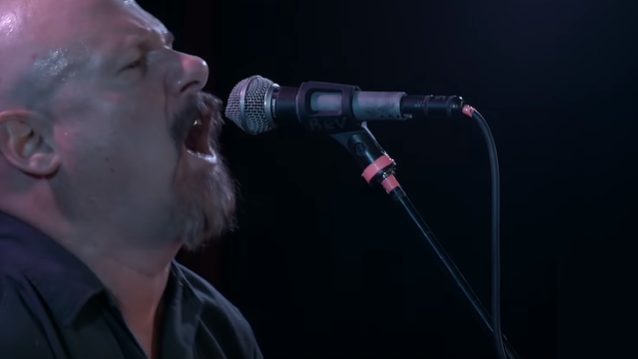 Darko Živković of Theory Of Chaos radio conducted an interview with frontman Gary Meskil of hardcore/metal pioneers PRO-PAIN prior to their November 19 concert at SKCNS Fabrika in Novi Sad, Serbia. You can listen to the entire chat via the SoundCloud widget below. A few excerpts follow (transcribed by BLABBERMOUTH.NET).

On whether PRO-PAIN's busy tour schedule is hard on him personally:

Gary: "It certainly doesn't get any easier. I've been doing this for a very long time. It's always difficult to leave things behind such as family and friends. It just becomes more or less like a job, but a very great job and certainly not one that I would take for granted. Life has given us a lot of great opportunities and certainly this music has brought a lot of great opportunities to us. Again, it's always difficult leaving home and maintaining stability at home. We love coming on tour and that's why we're here."

On how he composes new material and whether PRO-PAIN has any new songs in the works:

Gary: "I still write primarily on the guitar. I haven't written any PRO-PAIN material since the latest album, and that came out in late 2015. It's been some time now, I think it will help with the next album. We were on a very long roll for 20 years releasing records and after all that time, it's refreshing to give it a little bit of a break and get some perspective again. It will serve the next album very well."

On how he keeps his voice in shape:

Gary: "I try not to change it too much. I try to maintain a certain level of consistency with it. Sometimes on the road, it's easier than other times, like, I always find if you blow your voice out a little bit, it's always hard to get it back especially if you have to sing every day and you're playing sets that are in between an hour and an hour and thirty minutes. It can be very difficult. Again, I like to maintain a certain level of consistency with my voice and not beat on it more than I should."

On what his dream tour would be:

On the blending of hardcore and metal:

Gary: "I'm not really partial to either these days. I came out of the hardcore scene, but my tastes always change. My roots are in hardcore but I listen to a lot of metal and stuff like that."

Meskil was violently robbed in Brussels, Belgium in July 2017. He suffered extensive injuries when he was "struck on the head with an ice pick" before being set upon by a group on individuals. At the time of the assault, PRO-PAIN was touring in support of its latest album, "Voice Of Rebellion", which was released in June 2015 through SPV/Steamhammer.