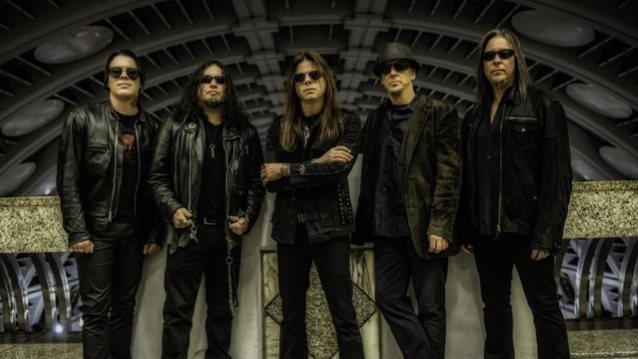 QUEENSRŸCHE guitarist Michael Wilton recently spoke to Shut Up & Rock On about the progress of the songwriting sessions for the band's next studio album, which is tentatively due in early 2018.

"After extensive touring, we've just been kind of doing sporadic touring this year," he said (hear audio below). "And everybody's writing and putting together songs and demos. We've got twelve [tracks] already that are with the producer right now, and he really likes 'em. And we're just gonna keep writing till we get a chance and get things started as far as pre-production, which should be very soon. We're in August right now, so I think, like, maybe in September or October, we should get [in the studio]. But we'd really like to get something out by next spring."

Helming QUEENSRŸCHE's next record once again will be Chris "Zeuss" Harris, who previously worked on 2015's "Condition Hüman".

The upcoming disc will be QUEENSRŸCHE's third to feature former CRIMSON GLORY frontman Todd La Torre who joined the group in 2012.

Wilton told United Rock Nations that the songs that he has written so far for QUEENSRŸCHE's next album "have a little more energy, a little more spunk to them. But, you know, it's gonna be a good hard rock record," he said. "It's not gonna be too ethereal — although you never know. [Laughs] We have a couple of songs that are way out there — very experimental, very, dare I say, progressive. So we challenge ourselves."

Wilton also spoke about QUEENSRŸCHE's decision to re-team Harris on the upcoming album. Harris has previously worked with ROB ZOMBIE, HATEBREED and SANCTUARY, among many others.

"It's a good working relationship," the guitarist said. "We've only used him once, so we haven't gotten to that point where we're burnt out on each other. And he's available — that's a big thing. And we trust his judgment — he knows us, he knows our personalities. So, in a sense, it's almost like a continuation. We can hardly wait to get working with him again."

KAMELOT's Casey Grillo made his live debut with with QUEENSRŸCHE on April 1 at Sycuan Casino in El Cajon, California. He is filling in for regular QUEENSRŸCHE drummer Scott Rockenfield, who is taking time off from the band's touring activities to spend time with his newborn son, appropriately named Rockson.