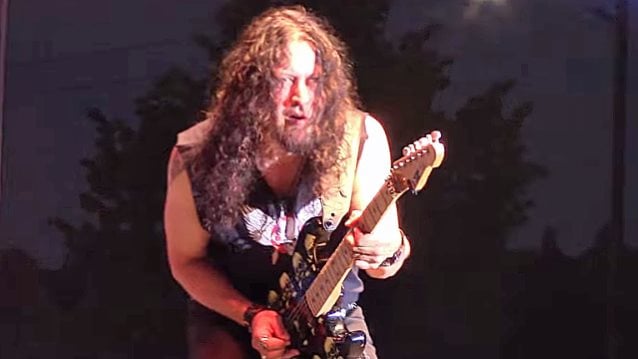 In a brand new interview with Canada's BeatRoute, QUEENSRŸCHE guitarist Michael Wilton spoke about much-anticipated follow-up to the band's 2013 self-titled album, due later in the year via Century Media Records.

"We've been working diligently on this for the past eight weeks, and between that touring as well, and this one is definitely a step above the last one," he said. "We've had more time and things are a little more clearer in everyone's heads. The consensus of the band was that everything fell into place on the last album so this one we spent a little more time and put some depth into the songwriting and really spent some time on making this a real next album for QUEENSRŸCHE. To the fans that wanted a longer album: well, we've recorded over an hour of music so far."

He continued: "The 2013 album was definitely a step [in the right direction]. Everyone says it should have been our seventh album. This recording, this body of music now, is more encompassing than even that of the first six albums.

"The motto of QUEENSRŸCHE, which [former guitarist and backing vocalist] Chris DeGarmo said years ago, when we were in our young 20s, was 'Let's make QUEENSRŸCHE a band that evolves with each recording but keeps true to its roots and where it came from.' So the band has really taken to that motto and that decision. Rather than doing something completely 180 degrees, we are staying to our roots. We are QUEENSRŸCHE, the DNA, the proven assets."

Wilton added: "It runs the gamut of the first six albums with a twinge of QUEENSRŸCHE from the modern age."

"Queensrÿche" sold around 13,500 copies in the United States in its first week of release to land at position No. 23 on The Billboard 200 chart. The record arrived in stores on June 25, 2013 via Century Media Records.