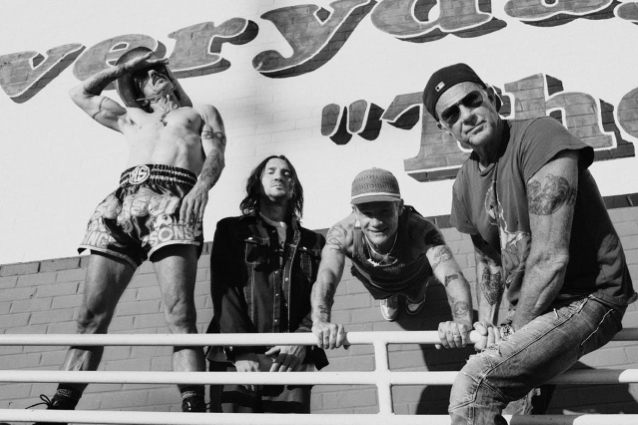 In a new interview with Rolling Stone, drummer Chad Smith said that the four members of the band "getting along great", and are "really listening to each other in a new way".

"All of our records are just real good snapshots of where we're at that time," he says. "You can't really go, 'Oh, gee, I hope it's as good as...' Then you're starting to have preconceived notions about what you want to write.

"We really like it and we're proud of it and it has to start there. If other people like it, great. If people compare it to this or [say] it doesn't sound like that, we have no control over that. But yeah, we're all really happy with the record."

Regarding the return of Frusciante, Smith said: "He is so dedicated. He's so into it. He's working so hard. We're all working hard, but he's in there with all the overdubs and the magic that he brings."

According to Chad, most of the new album was written after the start of the pandemic, with the actual studio sessions taking place earlier this year.

"We could just plow through and write, and that's what we did," he adds. "It was kind of a blessing, because we want to come out with new music and play some new songs. It's going to be great when we finally go out next year and have a record to play, and a bunch of other stuff, obviously."

As previously reported, RED HOT CHILI PEPPERS will embark on a world tour next spring. The 32-city global stadium trek kicks off on Saturday, June 4 at Estadio La Cartuja in Seville, Spain with stops in London, Paris, Dublin, Los Angeles, Chicago, New York, and many more before wrapping up in Arlington at Globe Life Field on September 18. The tour is produced by Live Nation.

In October 2020, Frusciante told the Australian digital radio station Double J that playing with his RHCP bandmates Anthony Kiedis, Flea and Smith once again was like "returning to family. I'm extremely comfortable with those people. It was as if no time had gone by at all when we started playing, pretty much, with a couple of minor exceptions, like how Chad and I gradually got our communication together in a new way. Basically, we're all just as comfortable with each other as we ever were, and it just felt like that right off the bat."