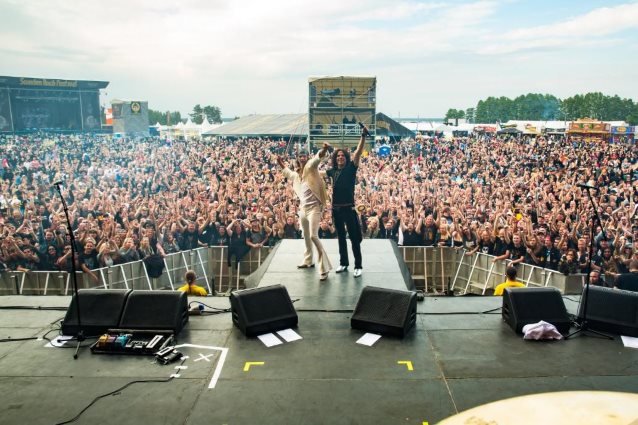 Frontiers Music Srl will release the new album from reunited Norwegian/American hard rockers TNT in the spring of 2017.

Earlier in 2016, singer Tony Harnell and guitarist Ronni Le Tekrø started writing new TNT material together for the first time in over ten years. According to a press release, "The music is truly exciting and the new record promises to be a landmark release for the band."

Ronni says: "We have made our best album to date, and are excited to work with Frontiers to get it out to our fans!"

Tony adds: "We are looking forward to tour worldwide in 2017/18 and to play in as many places as we can."

TNT has already booked a few shows to celebrate the 30th anniversary of its classic album "Tell No Tales", with more planned after the new disc's release.

Harnell rejoined TNT in May, less than a year and a half after his most recent departure from the group.

Harnell last quit TNT in January 2015 after a fifteen-month stint with the band, explaining that he "had really high hopes that it would last this time and that we would continue for years to come, but it is a very volatile little machine." He later told "The Classic Metal Show" that he "never actually got grooved back in with the band" and that he and his bandmates hadn't come to an agreement about how to "operate as a band." He explained: "We had no plan in place. Was I gonna be a hired gun in my own band? Was I gonna come back into the company? I mean, there were a lot of questions to be answered."

He continued: "I wanted to stay in the band for the rest of my music career; that was my goal. I said, 'Okay, this is it. We can make this work.' People wanted the band. There were people all over the world that wanted to book the band and that were excited we were back together… We were all in it for the long haul, and I tried to make it work for that. But when September [2014] came and the touring ended, nobody wanted to talk to me anymore, and my calls were not being returned, and my e-mails were not being returned by the most important people in the band that had the most influence. And the manager that came in to quote 'save the day' actually sunk the ship."

Back in November 2014, Le Tekrø told Metal Express Radio that the next TNT album would be recorded with the entire band playing together in the studio and not by sending each other files via the Internet. "I refuse to do that," he said. "I've never done that. The producer's gotta be there and the musicians, in the same room. Otherwise, I wouldn't call it an album. Then it's a project. There's no spirit in those albums. Maybe in electronic music you can do it. If you're working with rock and roll, the people have gotta be there, and rehearse and play."