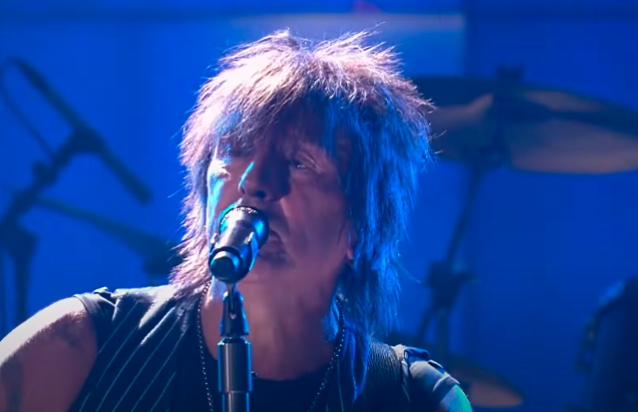 In a new interview with U.K.'s Daily Mail, former BON JOVI guitarist Richie Sambora was asked if he would ever consider rejoining the group. He responded: "It would have to be a special situation for me to go back, but I'm certainly not counting it out. I have no malice toward that band."

Richie's comments come just a couple of weeks after Jon Bon Jovi told Germany's Rock Antenne that "there's not a day that goes by that I don't wish that Richie had his life together and was still in the band. And yet, in a weird way, it's because of his inability to get it together anymore that we went on and wrote 'This House Is Not For Sale'."

Addressing Jon's remarks directly, Richie told Daily Mail: "When people say I don't have my life together — are you kidding me? I'm the happiest dude on the block."

Sambora also opened up about his decision to leave the band in 2013 to take care of daughter Ava, now 23.

"Obviously it hurts and you know, breaking up is hard to do," Sambora said. "I was in a situation and it was not easy to make that decision to leave the band and the fans. I was in a dire situation with my family and I had to make a tough decision and I did and I'm sure people weren't happy about it."

Sambora, who joined BON JOVI in 1983 and co-wrote most of the group's iconic hits over the following three decades, hasn't performed a full show with the band since he left the "Because We Can" tour seven years ago. He later said he thought BON JOVI "should have made more strides to become a band" and not turn into "Jon being the front guy and nothing else." Jon, in turn, claimed Sambora's "choices" had "led him astray."

Sambora rejoined BON JOVI on stage in April 2018 at the Rock And Roll Hall Of Fame induction ceremony in Cleveland, marking his first performance with the band in five years. Also appearing with the group was bassist Alec John Such, who hadn't played with BON JOVI since a one-off performance in 2001. They performed several crowd favorites, including "Livin' On A Prayer", "You Give Love A Bad Name" and "It's My Life".