The next day, Demmel wrote about the experience on his Facebook page. He said: "Last night was pretty rad. I got an invite by the Rhoads family to come down to Burbank and celebrate Randy's 60th birthday at their wine room and play a song. Me and my bud Donny Speer bombed down the 5 and met other buds David Culberhouse and David Foster for some food then hung out at Brent Woods's awesome pad to run through 'Goodbye To Romance' on acoustics before heading to the event. They had a bunch of his stuff on display including the guitar he wrote 'Dee' on and some of his handwritten lessons, plus of pictures and polka/bow-tie decorations everywhere. Had a great time hanging with my guys as we all Randy nerds together back in HS and I appreciate them taking the time to share this with me.

"Brent and I were joined by Chas West on vocals and I got some goosebumps singing the chorus with Kathy (Randy's sister) and her husband along with all that were there. We proceeded to butcher 'Steal Away The Night', but it had awesome, positive energy and was really fun jamming with hose dudes.

"Such a highlight to be a part of a great event. Honored is an understatement."

A lover of classical music, Rhoads had taken initial steps into rock 'n' roll as a 16-year-old when he formed a band, that soon became QUIET RIOT. Rhoads was vaulted to the limelight in 1979 when Ozzy Osbourne chose the relatively unknown guitarist to help shape a new future for him via his band, BLIZZARD OF OZZ. The result saw Rhoads co-script two of the most famous albums in hard rock history, "Blizzard Of Ozz" and "Diary Of A Madman", and rapidly ascended the stairway of fame and recognition for his virtuoso playing and writing. Famed for the way he fused classical flavors with technically excellent hard rock, Rhoads became one of the most influential lead guitarists in rock.

When he tragically passed away on March 19, 1982 in a plane accident, Rhoads was only 25 years old, but thankfully, the legend of his work, ethos and their continuing influence on a whole new generation of guitarists, has never dimmed.

Posted by Lacey I Garcia on Saturday, December 3, 2016 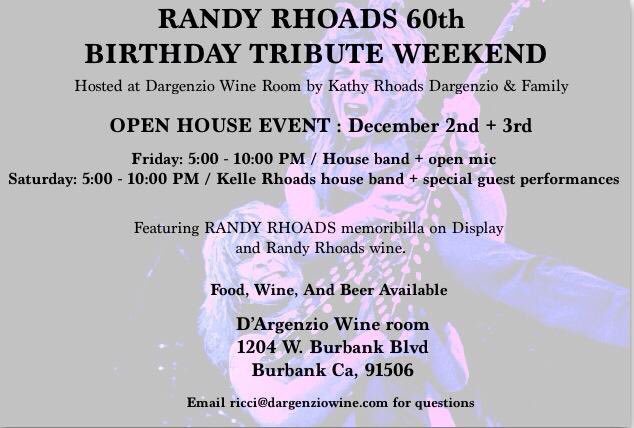