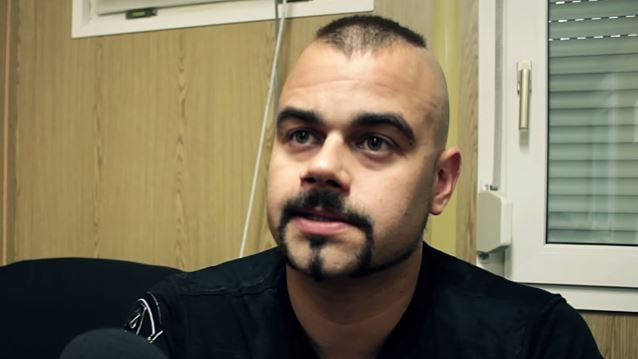 Vocalist Joakim Brodén of Swedish metallers SABATON was interviewed at Hungary's Fezen festival on July 30. You can now watch the chat below. A couple of excerpts follow (transcribed by BLABBERMOUTH.NET).

On how SABATON chooses which topics to write about in its songs:

"It's different every time. The most important thing is that it's as historically correct as we can make it. But also, we find it's quite important that it's interesting to us. Because if it's not interesting to us, then, I think, in the end, the lyrics will be worse. If we don't feel any kind of connection to the subject… We tried before, and it's not the same. I mean, there are first albums when we sang about anything… On [2007's] 'Metalizer', which is not about military history only, I ended up with a feeling that writing the lyrics was not so much fun; it was a necessary evil. While, as soon as we twisted into history and you feel a connection to a story and you wanna tell it, and you wanna tell it really good. And you get that to connect with the music, man, I think that's an extra feeling. And there is enough bands singing about drinking beer, having sex and killing dragons."

On whether any SABATON songs were written about topics that were requested by the band's fans:

"Not by request, but I would say on at least [2010's] 'Coat Of Arms' and [2014's] 'Heroes', about fifty percent of the material — I'd say between forty and fifty percent — was, actually, stuff we heard about through our fans; somebody gave us a book or sent us an e-mail. Obviously, you can't just send an e-mail and request a song and we make it, but we were very grateful that so many people have sent us links and ideas, because, man, fifty percent or even more of the ideas we get, we never heard about. So, by all means, if you have an idea and you think we haven't heard about it, please let us know. And please don't come with stupid suggestions. Don't tell us to do it about 'Star Wars', don't tell us to do it about the D-Day landing in Normandy beach; we already did that with [2005's] 'Primo Victoria'. Anything else is good."