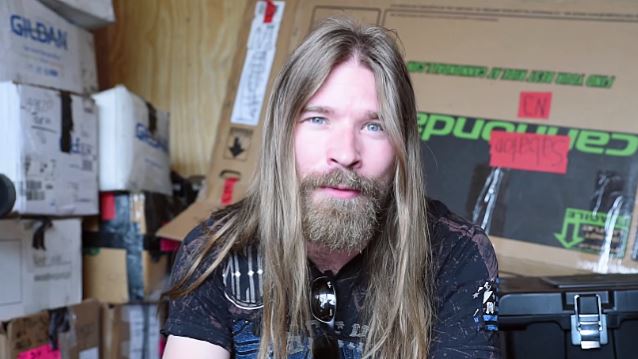 PureGrainAudio.com ran through some of its "Most Extreme" questions with bassist Pär Sundström of Swedish metallers SABATON when the band played at this year's edition of the Rock On The Range festival in Columbus, Ohio. You can now watch the chat below.

Asked if SABATON has begun working on material for its eight album and when fans can expect the follow-up to 2014's "Heroes", Sundström told FeMetal TV: "The next album's gonna come out at the end of next summer, if everything goes well. We have topics for it, we have plans for it, but we can't tell it yet, because it's still a secret, and also, we don't wanna tell things which might change. Because until it's recorded, you never know if it's gonna change."

He continued: "We have some good topics [for the lyrics]. We haven't really written any songs yet. We've got ideas for some songs, some good ideas. Because we are touring so much, and it's really complicated to write music on tour; for us, it's really complicated. And so, we're gonna start in the autumn writing songs. We still have some few ideas. But, really, in the autumn, we're gonna start writing [properly for the next album]."