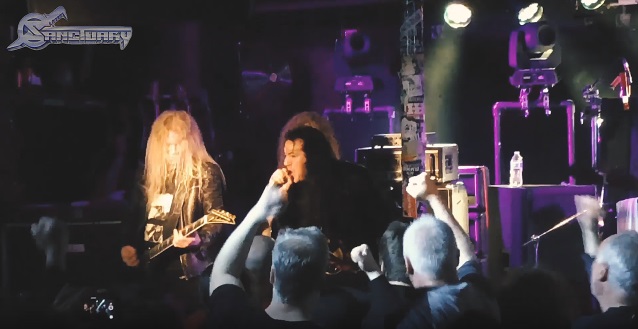 Former SANCTUARY members Jeff Loomis (guitar) and Jim Sheppard (bass) rejoined the veteran power metal band on stage on March 5 at El Corazon in Seattle, Washington to perform the songs "Taste Revenge" and "Future Tense", respectively. Video footage of their appearance can be seen below (courtesy of "Iron" Mike Savoia).

SANCTUARY's ongoing North American tour with ICED EARTH is acting as a tribute to the musical legacy of SANCTUARY singer Warrel Dane, who passed away last December. Guest vocals for SANCTUARY on the trek are being provided by Joseph Michael (WITHERFALL). Also joining the band on the road is second guitarist Joey Concepcion (ARMAGEDDON, THE ABSENCE).

Formed in 1985, the band was signed to Epic Records with the help of MEGADETH guitarist Dave Mustaine and released two records, "Refuge Denied" (1988) and "Into The Mirror Black" (1989), which saw them perform with the likes of MEGADETH, FATES WARNING, WARLOCK and DEATH ANGEL. The band disbanded in 1992 as members Dane and Sheppard went on to form the highly successful metal act NEVERMORE with acclaimed guitarist Jeff Loomis. SANCTUARY reunited nearly 25 years later in 2010 and appeared at several festivals worldwide before returning to the studio to record their acclaimed full-length comeback album, "The Year The Sun Died", for Century Media Records in 2014.

In a recent interview with Loud TV, Loomis — who played with SANCTUARY in the early 1990s and again in 2010-2011 — said about Dane's passing: "It's a sad situation with one of my best friends that I grew up being in a band with. [He was] one of the best lyricists in metal, I believe, that was ever out there — a fabulous person. He was a troubled person too at the same time; he had some issues. We had many great times together in the past, and we had many bad times, but I would say that the good times outweighed the bad. And in the end, we were talking still as friends, and we talked in the end before he passed away. We were on good terms. It's a very sad loss to the music community and he'll be well remembered as one of the great vocalists of a metal era."

Loomis added that Warrel had been "struggling with drinking and things like this" for years before he died. "I'm not getting into too much detail there," he said. "He had some troubles. I'm gonna miss him a lot. He was a great friend of mine and he was a wonderful human being."