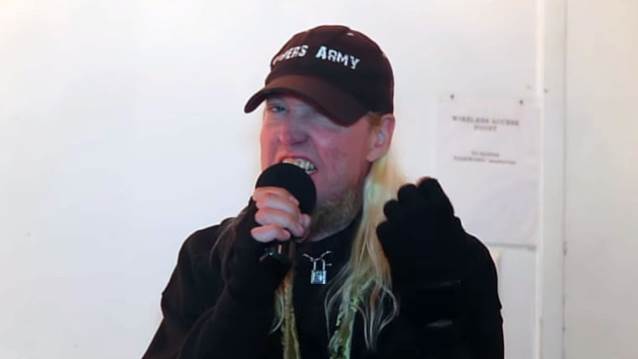 ArmyOfOneTV conducted an interview with SANCTUARY and NEVERMORE singer Warrel Dane on October 17 before SANCTUARY's show at Terminal 5 in New York City. You can now watch the chat below. A couple of excerpts follow (transcribed by BLABBERMOUTH.NET).

On why he doesn't do as many high-pitched screams as he used to:

"There's some in there, but it's not 1988 anymore, and I'm a little more mature, so I focus on my strengths now. I can still sing the high notes, but I'm more comfortable with the mid-range, kind of, tough-guy thing right now. You always have to focus on your solid parts."

"From the first record [1987's 'Refuge Denied'] to the second record [1989's 'Into The Mirror Black'], we changed and progressed a lot, and we kind of did the same thing [on 2014's comeback album 'The Year The Sun Died']. Even though there was a big gap in the years there, I think had we stayed together at that point, this is where we would have come to anyway. So it's all kind of full circle."

SANCTUARY's tour kicked off October 9 in Indianapolis and will keep the band on the road through the end of the month, wrapping up with an October 31 gig in SANCTUARY's hometown of Seattle.

"The Year The Sun Died" was released in October 2014 via Century Media. The CD was recorded in Seattle at Soundhouse Studios with producer Chris "Zeuss" Harris (SOULFLY, SHADOWS FALL, HATEBREED, MUNICIPAL WASTE).