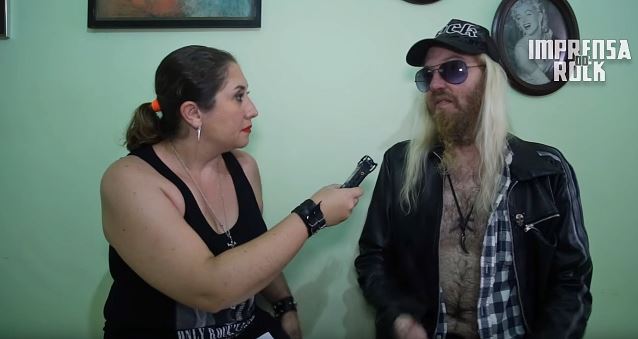 Brazil's Imprensa Do Rock recently conducted an interview with SANCTUARY and NEVERMORE singer Warrel Dane. You can now watch the chat below. A couple of excerpts from the chat follow (transcribed by BLABBERMOUTH.NET).

A how he takes care of his voice:

Warrel: "The most important thing for a singer is you have to get a lot of rest, a lot of sleep. You have to drink a lot of water. You have to hydrate yourself. And you… I know I have a bad reputation about alcohol, but you kind of have to stay away. So I'm a little better now these days than I was. I know I have a bad reputation for drinking too much, but I don't so much anymore. And you just… you just have to realize your instrument and know your limitations and know your strengths. I used to, when I was younger, sing in the stratosphere — very high. As you get older, and I will completely admit this, I can't sing that high anymore. So now I focus on my strengths. And it's no secret that I'm a fan of goth music, so I love singing low."

On SANCTUARY's plans to write and record the follow-up to 2014's "The Year The Sun Died" album:

On the musical direction of the songs that he has written for his next solo album, the follow-up to 2008's "Praises To The War Machine":

"The Year The Sun Died" was released in October 2014 via Century Media. The CD was recorded in Seattle at Soundhouse Studios with producer Chris "Zeuss" Harris (SOULFLY, SHADOWS FALL, HATEBREED, MUNICIPAL WASTE).