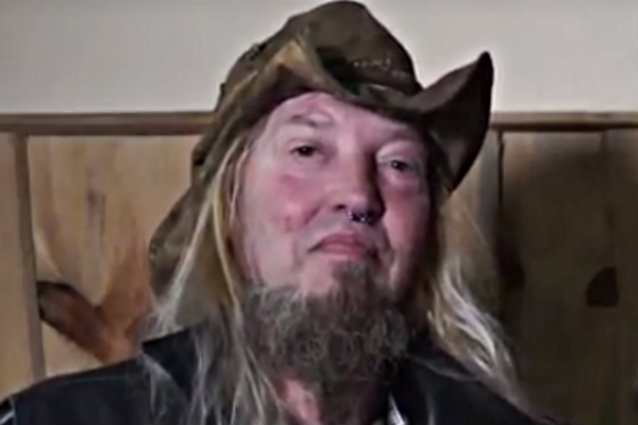 SANCTUARY vocalist Warrel Dane says he has an "alter ego" and "completely split personality" while onstage, created after he learned how to adapt and mold his live persona to deal with the often dark lyrical nature of his previous band, NEVERMORE.

In an interview with Claudia of Austrian web site We Don't Care conducted at this year's MetalDays festival, which was held July 23-29 in Tolmin, Slovenia, Dane, along with co-founding SANCTUARY guitarist and primary songwriter Lenny Rutledge, was asked to describe the band's songwriting process. "It depends," said Lenny. "The process can be different. It's not always the same, but a lot of times, I just try and come up with a riff that I like. Then usually, I'll present it to the band 'Hey, we have this idea.' Then they help me transform it."

Added Warrel: "Then you don't listen to them if they have their ideas and you do it the way you want to."

"I forcefully suggest certain ideas," continued Lenny. "Yes. We would like to say it's a democracy, but it's not. It is a joint effort, but Warrel and I write most of the stuff. Everybody helps. It's a team effort to come up with the final product, let's put it that way."

"Don't quote a NEVERMORE song," said Dane, sarcastically. "We're trying to disassociate with that. Then you have to bring that up."

SANCTUARY, which reformed in 2010 after an eighteen-year break, has spent recent years touring in support of its comeback album, 2014's "The Year The Sun Died", as well as 2016's "Inception", an album comprised of presumed lost 1986 studio recordings, which Rutledge discovered and were then magically restored, remixed and remastered by Chris "Zeuss" Harris (QUEENSRŸCHE, HATEBREED).

Since SANCTUARY was taking part in summer's European festival circuit, Rutledge and Dane were asked how they approach live shows. "For me, it's like your alter ego," said Lenny. "I'm quite a bit different. I'm a laid-back guy, but onstage, I don't feel I'm like a laid-back guy, it's more of your time to shine and everything. It's definitely a different alter ego for me."

"Of course, you definitely are an alter ego on the stage," said Warrel. "I learned years ago that I had to adapt and change my personality just to deal with the stress and everything that goes along with it. I'm not the same guy when I'm onstage; I'm a completely split personality. I think that's a little bit necessary. I guess that's the creative side of me. But, I enjoy when I'm at home, I'm a quiet guy that just sits on the couch with his cat. [Laughs]"

Originally formed in 1985, SANCTUARY scored a record deal with CBS/Epic with the assistance of MEGADETH leader Dave Mustaine, who proceeded to produce the band's 1988 "Refuge Denied" debut and took them out on the road with MEGADETH. SANCTUARY would release one more album for CBS/Epic, 1990's "Into The Mirror Black" before dissolving in 1992 in the wake of internal fighting and the grunge movement. Dane, along with bassist Jim Sheppard and then-touring guitarist Jeff Loomis, would go on to form NEVERMORE the same year.