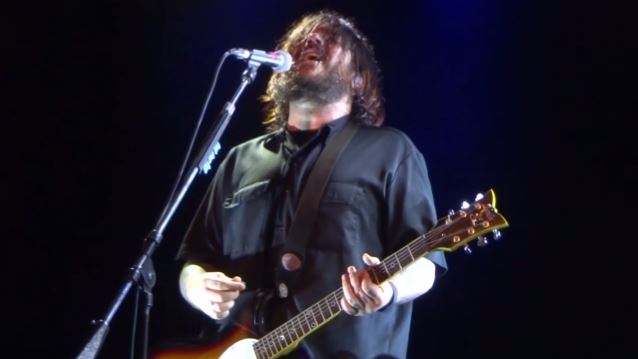 SEETHER frontman Shaun Morgan has expressed his dismay with the stifled state of U.S. rock radio, explaining that may of the longtime classic and hard rock stations have switched to an alternative-only format.

Speaking to Sticks For Stones, Morgan said: "Here in the States, it's becoming more difficult, man. Alternative radio stations just don't want to play songs with guitarists. They play '90s alternative bands like ALICE IN CHAINS and NIRVANA, but they don't play new bands with guitar. They're, like, 'That's not alternative anymore.' That's just how it is now. If we're lucky enough to get played on radio, we'll get played right after a Lorde song, which is fine. I like Lorde, but I don't think she's a goddamn rock artist. She's not alternative; I think she's more pop."

He continued: "I think there is a weird sort of gray area about what is rock music and what is alternative music. It's sort of annoying. It seems like alternative stations think they're 'the cool kids of the radio world.' They can make and break careers, man. There's a lot of bullshit bands coming out and a lot of bands being ignored because they play guitar. We used to be one of the five or ten bands they'd play all the time; no questions asked. If we put out a single, they'd play it because we'd done so much for them. But now they've switched to 'alternative,' and we don't get played at all."

Morgan added: "We went for ten years playing every single radio station, playing all their events and birthday bashes or whatever the hell you call them, and then they turn around and say, 'We don't play you guys anymore because we're alternative. We don't play rock bands now.' It's, like, 'Get your head out of your fucking arse, dude.' It's bullshit."

Rob Zombie echoed Morgan's sentiments in a September 2014 interview, explaining that long-running Phoenix commercial radio station KDKB-FM's (93.3) change of formats from rock to alternative was "really a bummer, because being on tour, you can really sense it, because certain markets will be really great markets, and then they won't be. And it always relates back to the radio station. If there's a great station, it's a great market, and you'll have huge crowds. And when the rock station dies, over the years, the crowds die and dwindle off, and what would be a killer market is not a great market. And then just out of a business point of view, you tend to avoid that market, because it's a dying market. And it's really a drag. We used to go places and there'd be… The radio stations would literally be fighting over each other to sponsor the show, there'd be so many stations. Now it's, like… You can't even find one. It's really crazy."

SEETHER's latest album, "Isolate And Medicate", landed at No. 4 on the Billboard album chart last summer. The follow-up to 2011's "Holding Onto Strings Better Left To Fray" marked the group's debut on Concord Record Group after spending the first decade of their career with Wind-Up Records.

Most of "Isolate And Medicate" was written at Morgan's home in New Hampshire or drummer John Humphrey's place in Oklahoma.