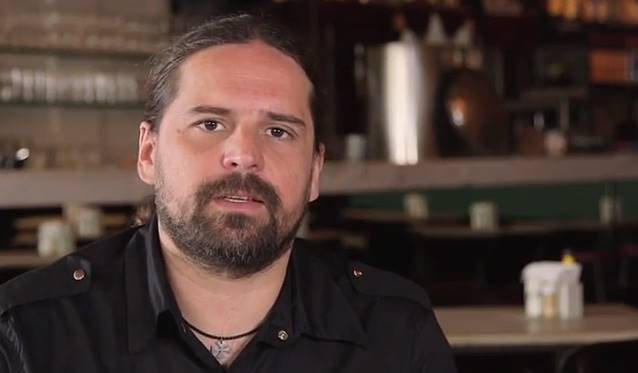 Pete Bailey of TeamRock Radio recently conducted an interview with guitarist Andreas Kisser of Brazilian/American metallers SEPULTURA. You can listen to the chat using the SoundCloud widget below.

SEPULTURA's new album, "The Mediator Between Head And Hands Must Be The Heart", sold around 1,800 copies in the United States in its first week of release.

"A-Lex", SEPULTURA's first LP to be recorded without either of the founding Cavalera brothers (Max and Igor; on guitar/vocals and drums, respectively), registered a first-week tally of around 1,600 back in January 2009.

"The Mediator Between Head And Hands Must Be The Heart" was released on October 29 via Nuclear Blast Records.

Although it was inspired by Fritz Lang's classic 1927 movie "Metropolis", "The Mediator Between Head And Hands Must Be The Heart" is not a concept album or a soundtrack like its precedessors "Dante XXI" (based on "The Divine Comedy") and "A-Lex" (based on "A Clockwork Orange").

"The Mediator Between The Head And Hands Must Be The Heart" was tracked over a 40-day period at producer Ross Robinson's (KORN, LIMP BIZKIT, SLIPKNOT) studio in Venice, California and was mixed and mastered by co-producer Steve Evetts, who previously worked with SEPULTURA on the "Nation" (2001), "Revolusongs" (2002) and "Roorback" (2003) albums, in addition to having collaborated with Ross on a number of other projects in the past.