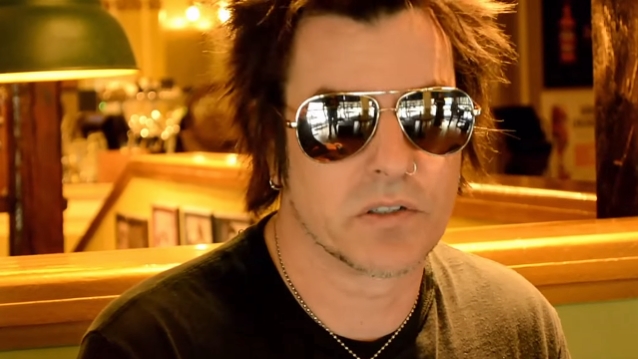 SKID ROW bassist Rachel Bolan has commented on the passing of Vinnie Paul Abbott. The former PANTERA drummer died in his sleep at his home in Las Vegas on June 22. He was only 54 years old.

Speaking to Eonmusic, Bolan said: "I was very shocked, as I was for Dime [Vinnie's brother, late PANTERA guitarist 'Dimebag' Darrell Abbott]. Maybe even more so. It's sad, man; not only those guys being gone and being as talented as they were at their craft, but the fact that those dudes will never play something again together again, Vinnie and Dime. They left behind a really great legacy, I guess is the only upside to it. Dime was probably the most creative person I've ever met in my life; whether it was playing his guitar, or his video camera, or just making up shit; he was probably the most talented and creative person I ever met in my whole life. So, it sucks that they're gone; it really does."

SKID ROW and PANTERA toured together in 1992. SKID ROW singer Sebastian Bach later told Australia's "The Morning Show" that PANTERA was the "craziest" band to tour with. "I warm up my voice doing scales — all this boring vocal stuff — and they would warm up by doing 14 shots of Crown Royal [whisky]," he said. "'We're ready! Let's go!'"

Vinnie Paul and Dimebag co-founded PANTERA. When PANTERA broke up in 2003, they formed DAMAGEPLAN. On December 8, 2004, while performing with DAMAGEPLAN at the Alrosa Villa in Columbus, Ohio, Dimebag was shot and killed onstage. He was 38 years old.

Not long before his death, Vinnie laid down the drum tracks for HELLYEAH's sixth album at The Hideout recording studio in Las Vegas. It is not presently clear when those recordings will see the light of day.